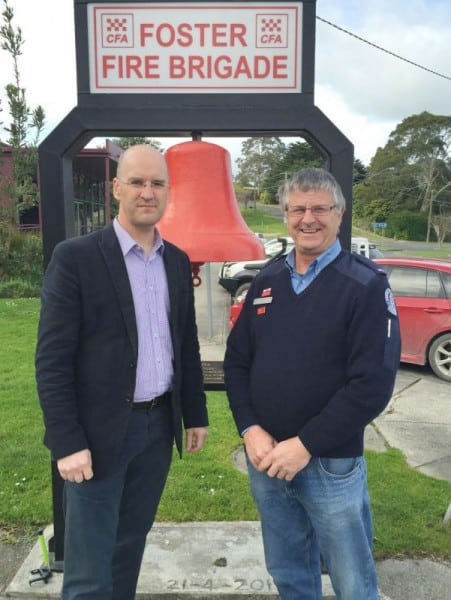 THE Nationals Member for Gippsland South Danny O’Brien has vowed to continue fighting for the replacement of fire stations in Foster and Mirboo North.

Mr O’Brien said Foster and Mirboo North stations were outdated, cramped and not suitable for modern fire fighters and needed to be replaced.

Foster Brigade Captain David Jones said that it is imperative that something be done as soon as possible.

“As it is, the fire station as it is only just meeting the community’s needs,” Captain Jones said, adding that the station certainly is not meeting the needs of Foster’s Fire Brigade’s members, pointing out that there is insufficient room for the station to be used as a training facility, there is no provision for the filling of tankers on site and no off-street parking.

“Conditions inside are cramped; there is only just enough space for tankers, leaving absolutely no room for error when parking them,” Captain Jones said.

Funding was provided by the last State Government for rural brigades to renovate their facilities, but unfortunately the rural/urban brigades, such as Foster and Toora weren’t included.

Two of the other brigades in the newly-formed District 27, of which the Foster Brigade is now a part, are in line for upgrades ahead of Foster, meaning that improvements to the Foster station will be taking a back seat for quite some time to come.

“I wrote to the Minister for Emergency Services Jane Garrett some months ago seeking funding for an upgrade of both these important stations. Unfortunately the response I received indicates that the government has no funding available for town brigade upgrades,” Mr O’Brien said.

“That is very disappointing but it won’t stop me from continuing to fight to have these stations replaced,” he added.

Mr O’Brien raised the matter in Parliament last week and has called on the Government to come to the party.

“I’ve spoken to the excellent volunteers at Mirboo North and Foster, as well as many other stations around the electorate, and I know how hard they work and the hours they put in to protect our communities,” Mr O’Brien said.

“It’s not unreasonable of them to want modernised fire stations which at the very least are capable of adequately housing their fire trucks, which at the moment is barely the case.

“Both the Foster Brigade Captain David Jones and Mirboo North’s group officer Mark Bourke raised these issues with me some months ago and I will continue to work with them and the community to ensure that ultimately we deliver on new fire stations in both these towns,” Mr O’Brien said.