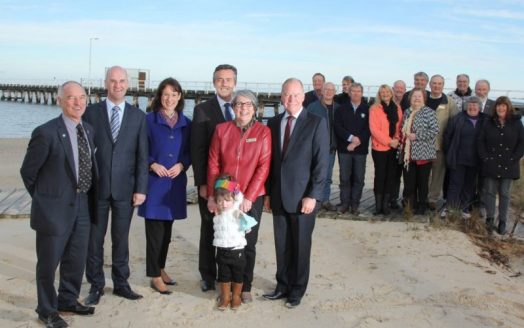 A RE-ELECTED Coalition Government would commit $4.8 million toward the reconstruction of the Port Welshpool Long Jetty.

Federal Member for McMillan Russell Broadbent and the Minister for Infrastructure and Transport, Darren Chester, who is also the Federal Member for Gippsland, made the big announcement at Port Welshpool on Tuesday morning.

The State Government has already committed $5 million to the restoration of the iconic structure and South Gippsland Shire Council a further $1 million, but the major project, which is listed as a priority for Council, given its tourism potential, has long awaited federal funding.

Mr Broadbent said he was thrilled to be able to make such a major infrastructure investment for Port Welshpool. He said the restoration of the Long Jetty would deliver extensive benefits to the region.

“It’s certainly been a long process and one that has often been difficult to talk about publicly because of the confidentiality clauses imposed on such large scale government spending,” Mr Broadbent said.

“Together with the community, I have been fighting relentlessly over a number of years for the restoration of the Port Welshpool Long Jetty for the McMillan community, and I’m proud that together we have finally prevailed in securing this funding.”

Mr Chester said that Mr Broadbent had advocated strongly within government to secure the funding under the Coalition’s Community Development Grants program on behalf of local residents.

“To create jobs and boost tourism, we need to invest in public infrastructure,” Mr Chester said.

“This is a huge win for the South Gippsland community and it will happen because Russell Broadbent has fought so hard to secure this funding on their behalf.”

“The fight to secure this funding was long and hard and there was extensive behind-the-scenes work and hundreds of hours put into delivering this great outcome,” Mr Broadbent said.

“I would like to thank all those who have stayed true to the cause. The council’s application went up against many others from across the country. It ticked all the boxes under the application criteria of value for money, the promotion of economic growth and addressing issues of social disadvantage.

“I believe this project will have ongoing benefits for the region, drawing sightseers and fishing people from far and wide. The flow-on effects of the tourist dollar will be significant for not just Port Welshpool and Welshpool, but all of Gippsland.”

Mr Broadbent said his office had been in direct and long-term contact with the office of Minister for Regional Development Fiona Nash in regards to jetty funding.

“I thank Minister for Regional Development Fiona Nash, Minister for Infrastructure Darren Chester and former Victorian Deputy Premier and Member for Gippsland South Peter Ryan for all their efforts in helping to ensure the successful delivery of this funding,” Mr Broadbent said.