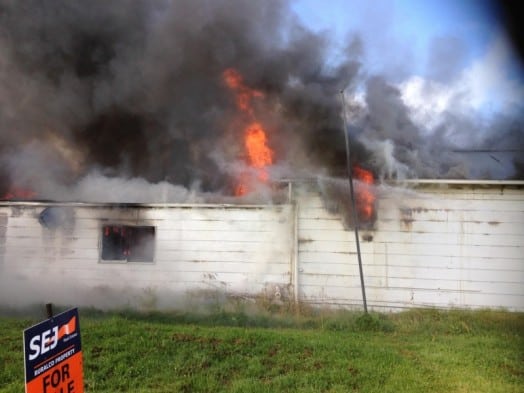 • Flames shoot from the burning house in Stanley Street, Toora.

THE local community has rallied around to assist a family of six who lost all their possessions in a house fire at Toora last Saturday.

The house they were renting behind a shopfront in Toora’s main street was completely destroyed. Michelle, Craig and their four children were at home at the time, but they managed to escape the inferno unscathed.

The fire was reported to Toora Fire Brigade around 8.20 on Saturday morning. By the time the fire fighters arrived the house was well ablaze. The Toora CFA officers were supported by brigades from Foster and Welshpool, taking the number of fire fighters to around 20.

It took an hour and a half to bring the fire under control, during which time the building suffered substantial damage. However, the fire fighters were able to protect neighbouring properties and preserve the shop facade.

Within hours of the fire, concerned members of the community had posted requests for assistance for “Michelle and Craig and kids” on social media. A trolley was established in the local supermarket as a collection point for items of food and clothing for the unfortunate family.

Detectives from Bass Coast CIU attended the scene in addition to a CFA fire investigator. The cause of the fire had not yet been established by the time ‘The Mirror’ went to press.