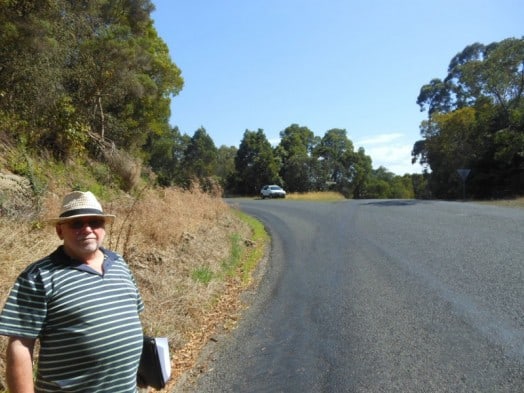 • Bill Maddocks at the dangerous intersection of Woorarra Road and Hedley Range Road, where line of sight is not good.

Mr Maddocks fears it may take a serious accident, possibly a fatality, before sufficient action is taken to improve line of sight at the T-intersection, located on a sweeping bend, and render it safe.

His concern is that drivers heading north from Welshpool along Woorarra Road aiming to turn right into Hedley Range Road don’t have a clear view around the corner of any traffic coming down Woorarra Road.

“They are committed to turn before they can be sure that the road is clear,” Mr Maddocks told ‘The Mirror’ at an arranged meeting at the intersection this week.

Woorarra Road is part of a school bus route. In addition, huge milk tankers frequent the area, along with the trucks and trailers of a local fertiliser contractor. None of these vehicles can turn quickly or stop easily.

“Do we have to wait until someone gets hurt before something is done?” pleads Mr Maddocks.

Two weeks ago his wife, Val, had a near miss. As she turned right into Hedley Range Road, she narrowly avoided a car heading south down Woorarra Road. Other drivers have also nearly come a cropper.

Mr and Mrs Maddocks have owned a property in Hedley Range Road, Binginwarri, since 1986 and moved to the area permanently two years ago. Since then Bill Maddocks has approached South Gippsland Shire Council on numerous occasions to suggest improvements at the dangerous intersection.

Shire contractors have, after much prompting, removed heavy vegetation from the bank on the west side of Woorarra Road and poisoned some of the shrubs and grasses, but some grass still remains, blocking the view of any driver not seated in the high cabin of a truck.

Mr Maddocks is grateful that some action has been taken, but he would like to see much more, specifically some reach mowing. Shire workers have told him the reach mower is currently at Toora, but could possibly be available in a week or two.

Having retired from a long career in roadside maintenance with VicRoads, Mr Maddoccks knows what he is talking about. He would like to see reach mowing of the bank carried out regularly and perhaps some warning signs installed. The ideal solution, he suggests, would be to install a mirror on the triangular traffic island at the intersection. He is not holding his breath while he waits for that to happen.