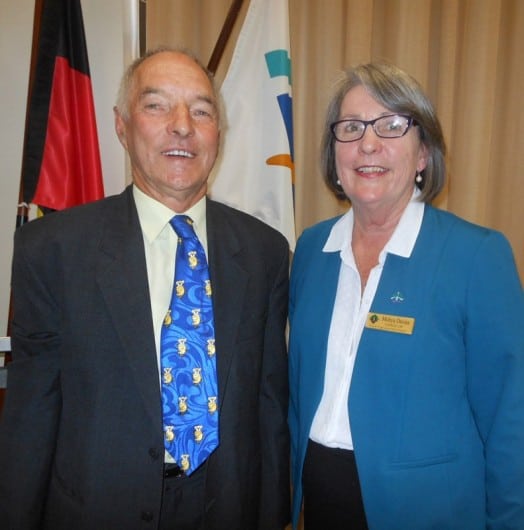 COUNCILLOR Robert (Bob) Newton, a lifelong resident of the Korumburra area and long-time councillor for the Strzelecki Ward, is South Gippsland’s new mayor.

Cr Newton was elected in a 7-2 vote by his Council colleagues over Coastal-Promontory Ward Councillor and Foster resident Mohya Davies, who was later elected as Deputy Mayor in a 5-4 vote ahead of Cr Lorraine Brunt.

In his acceptance speech, Cr Newton said he would fulfil the mayoral role as a “team leader” who was not about to let the position alter his values.

“What you see is what you get with me and I don’t propose to change,” he proclaimed. “I had no intentions of running until one week ago, I didn’t think I’d have the numbers, but it’s the confidence and support of my colleagues and the community that made me consider the role.” He told The Mirror later that Cr Jeanette Harding had asked him to take on the role. He was evidently assured he’d have the numbers, for several members of Cr Newton’s family were in the chamber for the vote.

Although he has never before been elected to the leadership role, Cr Newton brings a wealth of experience and local knowledge to the table, with 23 years’ service in local government, initially as a councillor in the pre-amalgamation Shire of Korumburra and then since 1998 in South Gippsland Shire. He is also an active participant in the community.

His work as a councillor, he said, has always extended further than his ward boundary. “People from all over the shire come to me. They call me no matter where they live, because they know I’ll follow it up for them. I am passionate about South Gippsland as a whole and will lead this team of councillors along the same lines.”

Cr Newton has first-hand knowledge of the issues that are important to farmers, and like many residents is keen to see roads improved in the shire. He is also focused on keeping rates to a minimum whilst improving infrastructure and current services. He has recently leased out his farm in order to have more time to spend at Council.

Cr Newton said one of his priorities was to reconnect Council with parts of the community that felt disengaged from local government decision making.

Cr Newton thanked the outgoing mayor, Cr Jeanette Harding, for her “commitment in tough times” and thanked his fellow councillors for their support.

“Ultimately it is about good governance in the best interests of our community,” he said, adding: “I believe we’re in for exciting times.”

The outgoing mayor said, in what observers of rowdy council meetings over the last 12 months would doubtless describe as an understatement, that events during the year had been “a little bit topsy turvy” and she apologised for not knowing all the rules and regulations.

Her deputy, Cr Nigel Hutchinson-Brooks, did not mince his words as he took his fellow councillors to task for their behaviour. He said that looking back over the last three years the council he was a part of had done a lot of good things, but one thing it hadn’t got right – as the Community Satisfaction Survey illustrated again and again – was its relationship with the community. He urged his fellow councillors to “get personality out of the way” and work as a team. Council, he said, should operate like a Cabinet, and contentious issues within ‘Cabinet’ should not be aired in public via letters to the press or any other means. Nevertheless, said Cr Hutchinson-Brooks, he had found it a great honour to support the mayor as her deputy and he promised he would support the next mayor to the best of his ability.

“I think all councillors, if they are honest with themselves, have aspirations to lead Council,” said Cr Mohya Davies in her pre-election speech. “We are all passionate about our shire, our communities and take our responsibilities seriously.”

She vowed that she would, if she were elected either mayor or deputy mayor, provide strong leadership and good governance, and also “regional representation and effective advocacy to State and Federal Governments; develop a sound budget that balances the competing pressures of providing services, improved infrastructure and meeting increased community expectations; a steady hand and not be distracted by the coming elections; and lay sound foundations for the next Council”.