Home » The Mirror News » Council to rule on Walkerville foreshore

Council to rule on Walkerville foreshore 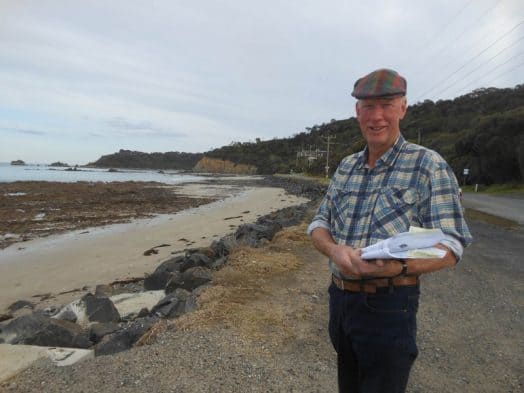 SOUTH Gippsland Shire Councillors will decide in their meeting today (Wednesday) whether to issue a permit for a $600,000 project to improve the Walkerville North foreshore.

The chair of the Walkerville Foreshore Committee of Management, Bill Bray, is keen for Council to vote in favour of the project, which will see car parking formalised in Bayside Drive, two new turning circles created, the sea wall made higher and wider, and new tables and seating.

Shire officers have recommended that the project go ahead. They have the support of the Department of Environment, Land, Water and Planning (DELWP).

The proponents point out that the proposal has numerous benefits, including stabilisation and protection of the land from erosion (through sea wall augmentation), delineation and separation of pedestrian and vehicular areas, extra picnic tables and seating, improved drainage and improved weed management of landscaped areas.

Council received seven objections to the original project plans. These primarily related to the number of car spaces to be provided, the size of car and trailer parking, traffic safety, the lack of need for the works and the consultation process.

These improvements were not enough for some, however. Three objectors made their views known at a public presentation session in council chambers last Wednesday.

The main thrust of the arguments of all three objectors – Don Atkins, Allan Buck and Jeremy Rich – was that the public had not been consulted adequately regarding the project. They said that a decision on a permit for the project should be deferred until there had been sufficient public consultation.

Bill Bray also made a presentation to Council. He argued that his committee had consulted widely and had listened to the objections raised by the main boating group and accordingly amended the plans.

“I think we’ve had good consultation,” he said, and reminded Council that the project had been a long time in the planning stage already and was largely funded by the foreshore committee.

The vast majority of the almost $600,000 project will be funded by the committee, with some assistance from government grants. Council, which has become responsible for the road in recent years, will contribute $130,000 towards the realignment and improvement of the roadway.

The mayor, Cr Bob Newton, urged the opposing parties to come together and discuss any grievances they had so that the project could go ahead.

“We need to get this done without any more delays, so that the foreshore doesn’t wash away any more than it has already,” he said.

His advice was followed, and a meeting was arranged between Allan Buck, Don Atkins, Bill Bray and representatives of the shire’s engineering and planning departments. The meeting was due to take place on Monday. Speaking to ‘The Mirror’ the Friday before, Bill Bray expressed hopes that all parties could be satisfied and the project could go ahead without further delay.

“We have a piece of beautiful coastline to be improved,” he said. “Through the Walkerville Foreshore Committee, the community is able to do it. The funding is there. Let’s hope the shire council makes the most of this opportunity and allows this important project to go ahead.”