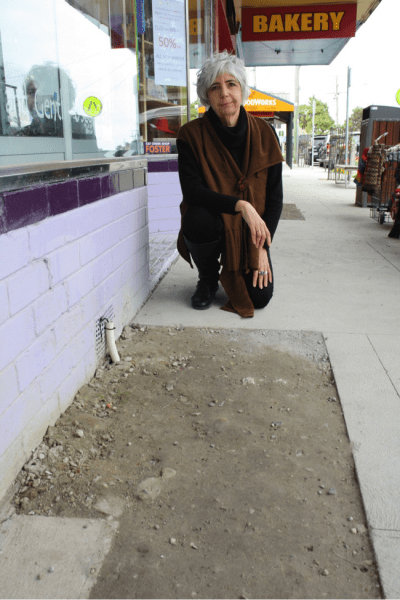 Not happy: Foster shop owner Deb Harris said she received no prior warning about the works, which she described as dangerous and “so frustrating”.

AN apparent communication breakdown over Telstra works in the main street of Foster has drawn the ire of a local trader.
Foster businesswoman Deb Harris said she had no forewarning that the telecommunications giant was going to tear up the footpath along Main Street. It was work undertaken to connect a fibre cable to the Commonwealth Bank branch.
Ms Harris said the workers left a huge mess in their wake, with lose stones filling the holes in the torn-up footpath. She believes the stones were a potential tripping hazard, not to mention an unsightly mess.
“We have laws to allow Telstra to do whatever they like, whenever they like. Even though Telstra knew that the street was dug up for almost a year (during the recent streetscape works), and they could perhaps have used some foresight and thought about what needed to be done, they didn’t, because it’s perhaps not how they operate,” she said.
But Telstra’s Area General Manager Loretta Willaton said there was nothing that could be done about the timing, as the call by the bank was “an independent customer request” that came after the streetscape works were completed.
A Council spokesperson told The Mirrorthey had not known about the works until after they commenced. Ms Willaton refuted the claim, saying all the usual processes had been followed in informing Council
Ms Harris took her initial complaint to Council, with a worker telling her they had struggled to find anyone at Telstra to talk to about returning the footpath to its previous state.
On Monday, SGSC asset technical officer Jesse Joyce was onsite, talking to Telstra subcontractors about what needed to be done. But Ms Harris was sceptical that the footpath would be returned to its former state.
“The concern now is that it gets restored to a state that looks as beautiful as it was. Council has to work as hard as it can, because it’s their investment as well as ours. It’s the ratepayers’ investment and the streetscape works have to last 20 to 50 years. So, let’s not have it like this in its first year,” Ms Harris said.
“People were wondering why this work was happening, but the bigger concern is safety. The stones that have been used to fill the gaps in the footpath are a tripping hazard.
“It’s just so frustrating. I was ready to run out and stop the workers. It was just so thoughtless the way they did it. It could have been done neatly with a little bit more care. If they’re going to fix it in the same way they ripped it up, we can’t abide that.”
The reinstatement works were being planned as The Mirror went to print, with workers to start  the job on Tuesday (October 9) or today (Wednesday, October 10).