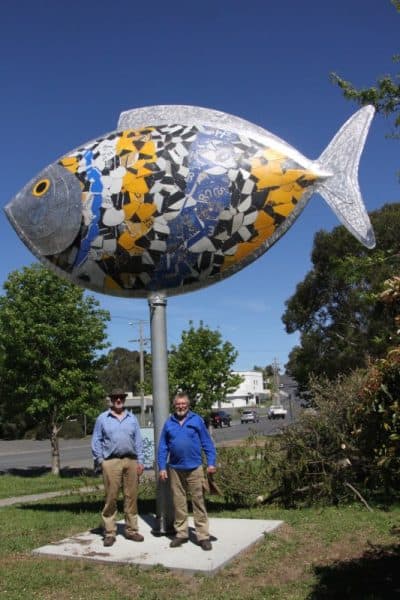 TWO of the giant fish involved in Melbourne’s Commonwealth Games of 2006 are now flying as one in Fish Creek, welcoming Rail Trailers as they enter town from the west.

The two fish were amongst the 72 which played a key role in the opening ceremony of the Games, forming a bridge for the arrival of the Games Baton in conjunction with the events at the MCG and were televised internationally to over 1.5 billion viewers.

Two of the fish involved in that visual treat appropriately found a home in Fish Creek. As they were not designed to be exposed to the elements indefinitely, the years took their toll on parts on them, but being same shape and size, Ray Jones was able to salvage parts of the outer frames of each fish and join them together and also incorporate some of the bowed metal bars which give the fish its shape.

This basic frame was then added to and covered in ‘scales’ created by Fish Creek artist Andrew McPherson from recycled aluminium road signs, sourced from various places including South Gippsland Shire Council. These are adorning one side of the fish in brilliant colour and in gleaming chrome on the other. Andy and Ray estimate that close to perhaps 3000 rivets were used in attaching the scales.

The fish was installed on Saturday November 12 Andy and Ray are very grateful to Adam Bright of Fish Creek who handled the excavating and to concreter Grant Flather of Yanakie who donated labour.

The fish has been installed upon a pole, rises to six metres and indicates wind direction. It is located beside the Great Southern Rail Trail between Andrew’s Ride the Wild Goat gallery and the old butter factory.

It has been a labour of love for Andrew and Ray and others who have been involved including those of the Great Southern Rail Trail committee of management and members of the Fish Creek Community Development Group.