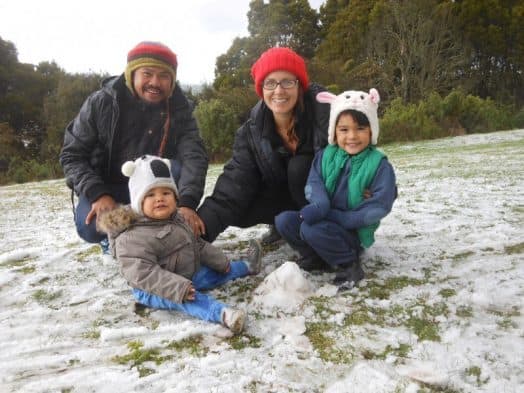 A LIGHT dusting of snow on high points across the district – the first for many years – made last week’s freezing temperatures almost bearable.

Wednesday was probably the coldest day of the lot. That was the day snow fell on land down to 300 metres, including on the Strzelecki peaks and at the Foster North lookout. Snow was reported on the South Gippsland Highway through Foster North and on sections of the Promontory Road south of Foster – although some people insisted that was not snow, but hail or sleet.

Certainly, it was cold, and the cold persisted, exacerbated by Antarctic blasts coming in the form of frequent squalls day and night. Wind speeds of up to 159 km/hr were recorded at Wilsons Promontory light station. Even at Yanakie the winds were fierce, with a top speed of 93 km/hr recorded at around 3am on July 13. Right across South Gippsland the wind howled and people shivered.

The worst winds brought down trees, branches and power lines. At Harmon Road, south of Foster, the power was out for 21 hours from 11pm on Tuesday, after a tree fell on power lines, and there were other outages around Yanakie, Leongatha and Mirboo North.

The sight of snow on Wednesday morning brought a smile to a few frozen faces. The last time snow fell in Foster was back in August 2005. It was heavier then, blanketing the hills around Foster. There was a very light dusting of snow in July 1990. Before that, you have to go back to May 31, 1977. ‘The Mirror’ reported then that the “heaviest fall of snow in the memory of most residents greeted South Gippsland on Tuesday when the countryside was a sheet of white right into the foothills all day long”.

Wilsons Promontory missed out on the snow this time, although Brett Mitchell from Parks Victoria said that snow had been seen on Mt Latrobe in the cold snap a few weeks earlier.

The snow didn’t last long, but while it was around a few hardy souls ventured outside for a spot of snow play.

Among the visitors to Foster Lookout was Thai-born Jojo Sriraksa, who was thrilled to see snow so close to where he and his family were staying in Foster. He and his wife Shelley were staying with Shelley’s parents, Colleen and Allan Smith, and took the opportunity to take their young children Rhama (4) and Anda (1) to see the snow at the lookout.

A lucky few people managed to make a snowman in their own back yard!