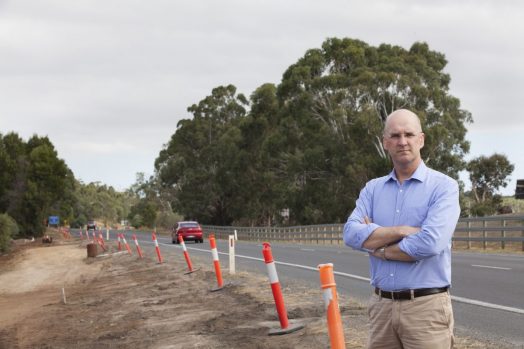 • Member for Gippsland South Danny O’Brien predicted that Council would be
“inundated with complaints about local roads”.

SOUTH Gippsland Shire Council is asking road users to help drive down the road toll, with 473 local casualty crashes in the past five years.
“In the last five years there have been 473 casualty crashes in the South Gippsland Shire, resulting in 154 serious injuries and 19 fatalities. It is important to bring those numbers down,” Council’s Road Safety Awareness Officer John Ernst said.

Mr Ernst said he is keen to get as much feedback as possible from local road users to help identify, and address, road safety issues in South Gippsland.

“We can analyse crash data and tap the knowledge of our engineers and the Police. However, to get a better understanding of why crashes occur, where the main problems are, and the opportunities to make improvements, we need feedback from the local community. We encourage everyone to have their say,” Mr Ernst said.
Member for Gippsland South Danny O’Brien predicted that Council would be “inundated with complaints about local roads”.

“I get a lot myself.  That’s why we’ve pledged to reintroduce the $160 million Country Roads and Bridges program which would deliver $1 million per annum to the Shire to help it fix local roads and bridges,” Mr O’Brien.
“Daniel Andrews and Labor shamefully axed this program on coming to government despite its success. Every time you hit a pot hole on your local road, remember Daniel Andrews axed this program while wasting $1.3 billion not to build a road in Melbourne – the East West Link.

“With six months to go to an election they’ve belatedly introduced a half-baked, half-funded program that now includes the regional cities not just rural councils where the need for funding is most acute.”
Owner of Storr Transport Stuart Storr said it was not major roads projects that were the issue in South Gippsland, but rather a lack of upkeep.

“They’ve got to have more general maintenance. From Foster through to Yarram there’s 32 culverts that that need replacing. I know it’s a major expense, but there’s a lack of main pipes,” he said.

“The issue we have now is that you’re getting a build-up of water across the road and you end up aquaplaning across the highway. I’d say to anyone who wants to see the problems with South Gippsland’s roads, come and have a look.

“Meet people and talk to people. You can’t lie about the roads. It’s there to see. It’s factual. It’s a bloody disgrace.”

Mr Storr said for the past two years his trucks had struggled to make it up a hill in Foster North, because there was very little grip on the road, with the vehicles forced to take an outside lane where traction was better.

He said there were instances where driver safety could be compromised and described the situation as a “disaster waiting to happen”.

The Gippsland Safe Freight Network member also believes local roads are not being correctly resurfaced, with crews using a metal aggregate of eight millimetres rather than 15.

“That’s not about safety, but rather the noise that would be generated,” he said.

The online survey, borne of Council’s new Road Safety Strategy, is seeking feedback from regular road users. Mr Ernst said the survey will be the first stage in the development of the new strategy.

Consultation with key user groups and community committees is planned for May and June.

The survey can be completed on Council’s website via: www.southgippsland.vic.gov.au/roadsafetysurvey