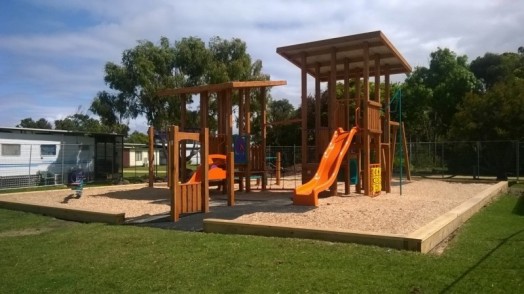 • New playgrounds have been popular additions to the council-run Yanakie and Long Jetty caravan parks.

“I THINK we’re on track,” declared Cr Nigel Hutchinson-Brooks after the latest quarterly report on the council-run caravan parks at Yanakie and Port Welshpool (Long Jetty) was presented to Council last week. The other councillors largely agreed.

Council last received an update in October. It related to the July to September 2015 quarter. “This last quarter has seen further capital and operational improvements, [and] the continued implementation of a tactical marketing program,” said Mr McDonald.

During the quarter, water tanks were installed to bring firefighting capacities at the parks up to scratch, and playgrounds were installed at both parks, a move which was warmly received by the public. Site rehabilitation work was carried out, especially at Yanakie, which also saw the installation of new amenity partitions.

A marketing campaign began, with advertisements and editorial placed in newspapers in the south-east suburbs of Melbourne, from where many park patrons come. In addition, brochures were printed and distributed. Targeted print media marketing will continue, along with emails to a subscriber list and website updates. The next quarterly update should be able to provide more details on the marketing campaign.

Turning to the financials, Mr McDonald reported that the income at Yanakie Caravan Park had been $51,188 higher than budgeted. On the other hand, expenditure had also been higher – $392,363 rather than the $344,832 budgeted for. The total variance was $3658.

Cr Hutchinson-Brooks said he wished to emphasise that Council had never expected to improve the state of the caravan parks overnight, but rather it was a process that would take five to ten years.

The mayor, Cr Bob Newton, agreed, saying “Our officers are making a good job of it.”

Cr Jim Fawcett pointed out that there was currently a cash flow problem at the parks, with some people occupying sites but not paying for their permits as part of a protest against council management of the parks. He said that he was pleased that there was a resolution process in place. Permit holders have been issued with a deadline to pay for their sites and some patrons at least have now paid.

Among current activities at the parks, the compliance transition period will continue to the end of March, and masterplans are underway for both parks, due for completion by the end of the financial year. A seasonal operations review is in progress, with a view to making improvements, taking into account the feedback of patrons.