Home » The Mirror News » Candidates speak up at lively forum

Candidates speak up at lively forum 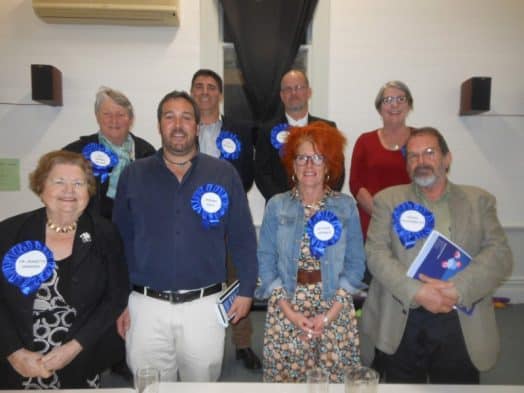 INTENSE interest in who will be the new South Gippsland Shire Councillors in Coastal Promontory Ward prompted an excellent turn-out for the ‘Meet the Candidates’ forum held in Foster last Friday.

A crowd numbering more than 60 people packed into the Manna Gum Community House for the forum, which was convened by Jo MacKenzie. In a gesture appreciated by all who attended, she arranged the forum with the help of a group of community-spirited local women keen to give the public an opportunity to meet and question the men and women hoping to represent them on Council.

The evening began with each of the eight candidates (the ninth candidate for the ward, Vincent Morfuni, was unable to attend) given five minutes to introduce themselves and explain why the people of Coastal Promontory Ward should vote for them.

Each of the candidates was commendably articulate. Most had prepared speeches, or at least notes. Ray Argento and Alyson Skinner managed, impressively, to speak eloquently off the cuff.

Several of the candidates, including Jill Wilson, Frank Oostermeyer and Matt Sherry, indicated that they are standing because they are dissatisfied with the performance of the current council and feel that the views of ratepayers are not being taken into account. However, when ‘The Mirror’ asked these candidates how they would act to improve the situation, specifically how they would better Council’s efforts at community consultation, they did not come up with any alternatives.

There was no shortage of questions from the floor.

Howard Plowright began by asking the candidates about their preferences. A recent government ruling has meant that voters will have to work harder to determine which candidates are aligned. They will have to rely on promotional material distributed by the candidates themselves. As of this election, candidate preferences are not allowed in postal packs sent to voters. Most of the candidates at Friday’s forum were prepared to state their allegiances. Mohya Davies, Ray Argento and Alyson Skinner have broadly similar views and values and are swapping preferences; Jeanette Harding professed no preferences; Jeremy Rich associated himself with Vincent Morfuni, and said he shared views with Matt Sherry, Frank Oostermeyer and Jeanette Harding, but he was “against preferences”. Oostermeyer, Jill Wilson and Sherry backed each other and Rich.

A question about how the candidates proposed to work with the other councillors prompted a range of responses. Oostermeyer volunteered that “it comes down to better communication and respect”, Skinner said the trick was to respect the other councillors and to share information, skills and passions. Mohya Davies said that in the most recent Council, trust and respect had been broken and it felt like being in the midst of a toxic divorce. “A number of councillors have not accepted council decisions and have questioned those decisions in public,” she complained. She pressed the need for councillors to work together and recognise that as a group they could achieve a lot.

Jeremy Rich asserted that councillors should be able to speak out in public as a democratic right and as a matter of freedom of speech. Bruce Beatson asked him if he really believed that all the disharmony was driven by democracy, to which Mr Rich replied that the answer lay in improved governance.

Alyson Skinner said that it was the role of councillors to support any decision reached by Council and not create conflict around it. Instead, she suggested, they should explain the decision to the community.

“Does everyone want to act with such common sense?” queried Deb Harris, and the answer was a resounding “Yes,” which gave the audience some hope.

Several of the candidates said they were opposed to the millions of dollars set aside in Council’s long term financial plan for a new municipal building, claiming that Council was wasting $32 million on a building it won’t need. Mohya Davies took the opportunity of a question about Council’s long term vision to defend the plans for the building, claiming that the issue had been beaten up as a vote-getter and was not fully understood.

She explained that an amount of $32 million had been modelled in the long term financial plan for a community centre and much-needed Leongatha library as well as a shire office to replace the “rabbit warren-like” current building. There will be opportunities to attract grant funding and it will not all have to come from rates, she said, adding that the final decision is some years away; it will be made in two councils’ time.

Jeanette Harding spoke up against a new municipal building, as did Matt Sherry. Jill Wilson, Ray Argento and Frank Oostermeyer expressed the hope that technology would be sufficiently advanced in a few years’ time to preclude the need for a big new building. Alyson Skinner broadly agreed, adding that she would want to examine all the facts and figures in the studies already carried out before reaching any conclusion.

She asked: “Why be Leongatha-centric? We need to look creatively, perhaps at hubs, and make the most of digital technology like the NBN which many of us have.”

At the conclusion of the two-hour forum, Jo MacKenzie thanked the candidates, the audience and the other event organisers. She said that she and her husband have had a lot of experience of Local Government and know what restrictions are placed on councillors by the Local Government Act as well as by other levels of government. She said it was heartening to see the candidates express the desire to work cohesively, but warned them that their task would not be easy and they were to be commended for putting themselves forward.