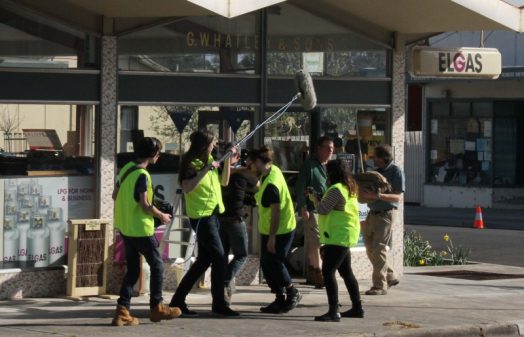 • Swinburne University film makers in action while filming ‘The Out There’ last week in Toora.

The filmmakers were graduate students who were relishing the opportunity to put into practice aspects of what they have been learning during their three-year Bachelor of Film and Television at Swinburne University.

Set in the 1990s, ‘The Over There’ is a short drama film which tells the story of husband and wife, Lou and Linda who must deal with the backlash and turmoil created after Lou’s brother Lem shows up at the pub in the small country town of Margot.

With Lem having previously thought to of fallen off the edge of the world, Lou and Linda face harsh backlash as accusations begin that the world is round and does not end at their property! Lou, Linda and the town must all come to terms with their lost identity and look for someone to blame for their ignorance.

Director Joel Green happened upon the idea of making a film in the area when he stayed at a friend’s property at Wonyip. The old house on the property had plenty of character and provided inspiration for a script centred around it.

The making of a film is the main focus of the students’ third and final year at Swinburne. The group spent around five days filming in the Toora’s Royal Standard Hotel, in the Toora/Wonyip area, and in downtown Toora – with the majority of the film makers staying at the Toora Lodge.

“There is so much involved in the making of a film,” said producer Anneliese Staubli, who explained that the first four or five months are taken up with creating a script, scouting for locations and finding actors. Also involved in the preparation for filming is applying for permits to shoot in public places and the students are grateful to Ken Fraser – Economic Development Co-ordinator at South Gippsland Shire Council for his assistance with that aspect of the project.

The students have enjoyed film making in Toora and wish to thank everyone for their co-operation and kindness during filming – residents of Toora and Wonyip, local storekeepers, and the licensees and staff of the Royal Hotel, Toora. Keep an eye on upcoming film festivals, as the group hope to have success in gaining the film some exposure to the public.