Home » The Mirror News » Byron gets his dog

Byron gets his dog 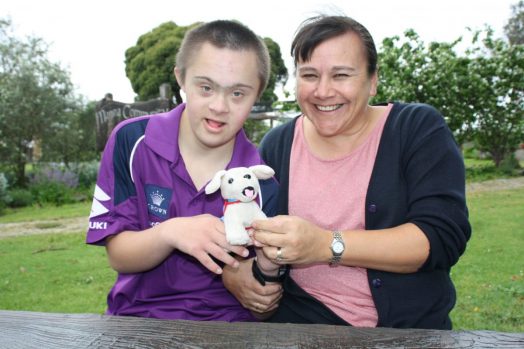 • Byron, with his mother Christina, is looking forward to getting his dog.

SPOILER alert: Byron Doran is going to get his dog.

It’s a chocolate Labrador called Zeus. The 15-year-old Foster Secondary College student will travel up to Sydney with mum and dad, Christina and Mick, to meet the newest member of the clan on November 17. The Port Welshpool family is overjoyed, and Byron is riding a wave of euphoria.

Of course, no one knew the announcement was imminent when Christina spoke to the paper last Thursday. It was the day after the interview that Christina rang back to deliver the happiest of news.

As it was, the family had waited for months – with Byron spending almost every waking moment (and probably a good deal of his sleep time too), thinking what it would be like to finally have a best mate.

“Byron has Down Syndrome, but he had to be diagnosed with Autism too to be accepted onto the Assistance Dogs Australia program,” Christina said.

“It’s been a long process. First up the parents do a course – there’s only one course in each state per year – and when we first applied in 2016 we couldn’t get on, because the waiting list was too full.

“Last year we managed to get on the list. Mick and I did the course, which was over three weekends. Then came the application, which was about 30 pages. We also had to do a video of our house and our life.”

“The dog always belongs to ADA, even when a dog is placed with a family. We’ll have support from them for the whole life of the dog, which is an average of 10 years. You can then opt to keep the dog as a pet, though it will be retired,” Christina said.

“If we’re still in the program he’ll get another one. And they’ll train it to his needs. We’ll keep the other one and have two.”

For Byron the prospect of having one dog is wonderful, but two would, arguably, be even better.

Christina said the rules around ownership are stringent and the highly trained Zeus will receive regular vet checkups and monitoring.

“He will almost be like a sibling for Byron. Byron’s rising anxiety was why we initially looked at the program. Bryon really needs a companion too, as he doesn’t have friends,” Christina said.

“It’s hard because he’s non-verbal. Zeus will be trained to pick up on his anxieties and distract him before they happen. We have to sit down with the people from ADA and work out what we want them to train Zeus for.

“They match the dogs to the people. It’s why the wait list is so long.”

When Christina spoke to The Mirror, she believed Byron was about seventieth on a waiting list of about 140. She thought it would take another year before she saw hide or hair of an ADA dog.

The November 17 meeting of Zeus, Byron and the family will be followed by a “pretty intensive 10-day course”.
“Byron’s been talking about the dog every day. We keep saying you’ll get a dog one day,” she said.
Christina is keen to raise funds to help support the vital work of the ADA. The organisation does not receive government funding.

A fundraising dinner and movie night is coming up on November 1. For more details call Wendy on 0435 439 125 or Christina 0429 881 229.  To donate directly to the cause go to: give.everydayhero.com/au/byron-s-journey-for-an-assistance-dogs