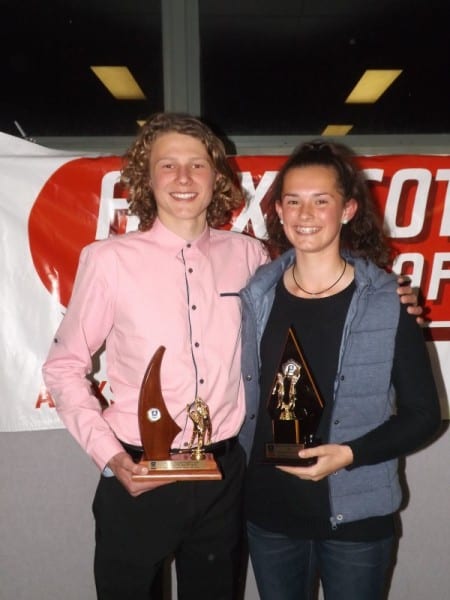 Unfortunately Brendan was not in attendance on Saturday night at the league’s annual wind-up because of slight concussion received in Saturday’s preliminary final loss to Fish Creek.

When The Mirror caught up with Brendan on Sunday morning he said he was extremely excited about winning the top award, but it was a bitter sweet occasion as he was very disappointed about his team’s loss to Fish Creek on Saturday.

The 30-year-old midfielder is in his second year as coach of Phillip Island after taking them to the premiership in 2014.

Prior to playing for the Bulldogs, Brendan coached Cora Lynn for three season after playing all his junior football in the Narreee Warren area.

Brendan also represented Vic Country this season, which shows he is one of the top players in country Victoria, and a very worthy winner of the Peter Moore Medal.

Brendan got off to a good start in the count leading by one vote after five rounds with eight votes from Stony Creek’s Cam Stone on seven and Dalyston’s Michael Kraska, Korumburra-Bena’s Ben Fitzpatrick, Tarwin’s Jamie Cann and MDU’s Joel Sinclair on six votes.

Brendan polled consistently well and led by two votes after 10 rounds with 17 votes, ahead of Kilcunda Bass midfielder Chris Endres on 15 and MDU’s Joel Sinclair on 14.

It was a close count all night and with four rounds to go Brendan still led by two votes over Chris Endres 23 to 21 with one of the early favourites Justin Marriott of the Allies moving into third with 18 votes.

Foster’s Nick Connellan had moved to 17 votes, along with Sinclair from MDU and Stone from Stony Creek all polling well.

With one round to go Brendan had sewn up the award with a four vote lead and both he and Endres polled three votes in the last round of the season to end up on 31 and 27 votes respectively. Justin Marriott of the Allies had moved to 24 votes with Stony Creek’s Cam Stone 21 and MDU’s Joel Sinclair on 20 rounding out the top place getters.

The night was catered for by the Allies Club and they did a great job from start to finish.

The first award of the night was the C grade netball best and fairest which was won by Oona Shepherd of Dalyston on 28 votes from IK’s Alison Hayes 27.

B grade was next with Janelle Smyth from IK and Helen Nicholls of Toora sharing the award with 29 votes from Kristie Moore of Stony Creek runner-up on 25 votes.

Dale Brown of Dalyston won back to back reserves best and fairest awards with 35 votes from Travis Cameron of Tarwin with 25.

The netball team of the year were presented next followed by the A grade netball top player which again went to Korumburra-Bena’s Christie Hillberg who polled 35 votes from Fish Creek’s Shannon Danckert on 29.

The football team of the year was presented next and then the league’s leading goal kicker Michael Kraska received his award for booting 119 goals for the season.

The night concluded with the toss of the coin for the rooms and short colours for this week’s grand final between the red hot favourites Dalyston and Fish Creek.

The league put a lot of work into hosting the night, it was a shame that for the second year in a row the league’s top player was not in attendance.