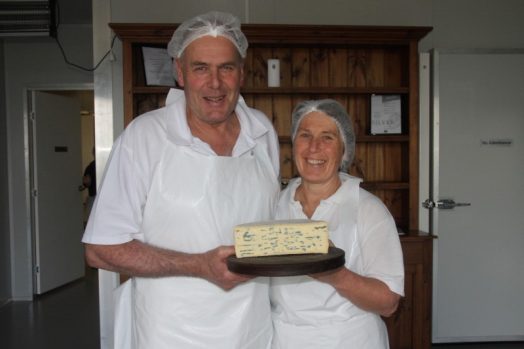 • Cheese producers Barry Charlton and Cheryl Hulls are thrilled with the continued success of their Berrys Creek Gourmet Cheese Riverine Blue – a soft blue vein cheese made from buffalo milk.

FOLLOWING hot on the heels of their success with at the Nantwich International Cheese Show in the UK last month, the cheese gurus from Berrys Creek Gourmet Cheese have done it again – with their Riverine Blue named as a State Winner in the 2016 delicious. Produce Awards.

Now in its 16th year, the delicious. Produce Awards (in partnership with Miele) saw a new approach to the Awards’ nomination process with the country’s top chefs and restaurateurs asked to nominate the passionate producers they work so closely with.

“Opening nominations in 2016 exclusively to the country’s leading industry experts has meant the calibre of entries this year is unprecedented in terms of quality and innovation, including some really exciting new producers we haven’t seen on the Produce Awards stage before,” she explained.

The delicious. Produce Awards State Judges carried out blind tastings to determine the State Winners in the categories of Earth, Dairy, Paddock and Sea.

The Riverine Blue – a buffalo cheese, has done exceedingly well since production began less than two years ago. Cheese producers Barry Charlton and Cheryl Hulls entered it in the 2014 Guild of Fine Food where it was awarded Bronze and this was followed by a Gold in the Royal Sydney Cheese and Dairy Show 2015, Gold and Champion Non Bovine Cheese as well as Grand Champion of Show at the Royal Queensland Food and Wine Show 2015.

Not only was it named the Highest Scoring Non Bovine Cheese and Champion Cheese at the DIAA Victorian Division 2015 – it also took home the title of Most Outstanding Show Exhibit. The Riverine Blue then outdid itself by taking out those very same awards in the DIAA Australian Division 2015.

These titles were followed up by Gold and Champion Goat Sheep Buffalo Cheese in the Melbourne Fine Food Awards 2015, and in this year’s Royal Sydney Cheese and Dairy Produce Show it took home Gold in addition to the Champion Sheep Goat Buffalo Trophy and the Australian Cheeseboard Perpetual Trophy.

Barry and Cheryl attribute their product’s success to it being created from top quality milk, and to Barry’s understanding of which cultures will work together in a specific type of milk to create the flavours needed.

“Buffalo milk is very different from cows’ milk. It’s a hard milk to work with but it produces a very high yield and has a lovely flavour,” Barry said.

The degree of difficulty in working with buffalo milk is certainly paying off for Barry and Cheryl, who will be very interested to see how the Riverine Blue fares in the national judging phase of the 2016 delicious. Produce Awards to be held in Sydney on September 12.