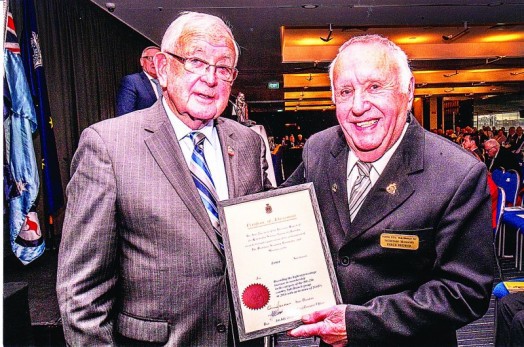 State President of the RSL, David McLachlan, presents a certificate of achievement to the secretary/manager of the Foster RSL Sub-Branch, Perce Brewer, in acknowledgement of the sub-branch’s significant increase in membership.

THE Foster Sub-Branch of the RSL has done it again!

For the second time in three years, Foster RSL has recorded the highest percentage increase in membership amongst all the country sub-branches of a similar size.

Foster RSL membership surged to 305 in 2014, an increase of 22.63 per cent over the previous year. As a result, on July 1, at the Annual State Conference at the Caulfield Racecourse, State President of the RSL David McLachlan presented Secretary/Manager of Foster RSL Perce Brewer, on behalf of the sub-branch, with a special certificate of achievement: “The State Executive of the Victorian Branch of the Returned and Services League of Australia records its warm appreciation of the achievement of the president, secretary, committee and members of the Foster Sub-branch for recording the highest percentage increase in membership in the category of the 101-250 Country Sub-branch group in 2014 with an increase of 22.63%.”

“Our membership has gone up even more since the 305 (not including social members) achieved last year,” said Perce. “It now stands at 372 (this includes social members).”

In 2012 Foster RSL won the same award, when it increased its membership from the previous year by a whopping 48 per cent.

This latest award could be the last for a while, though. Now that membership stands at well over 250, Foster will move out of the 101-250 group to a new group of sub-branches, and it can expect competition to be that much stiffer.

“Membership has increased steadily in recent years. We average one new member a week,” said Perce.

In 2010 there were only 19 members and the sub-branch was in danger of closing. Then Perce was appointed secretary/manager with a fierce determination to turn things around. The sub-branch became incorporated, a bar was built, the club got a liquor licence, and the clubrooms were extensively renovated.

The clubrooms now boast a modern bar, free pool table and extended opening hours: Wednesdays from 4pm until late, Fridays and Saturdays from noon until late, and Sundays of long weekends.

There are three types of membership.

Service Membership is available to people who have served in the Australian or Allied Defence Forces.

Affiliate membership is available for relatives of Defence Force members, as well as members of any Commonwealth or State police force, fire brigade, ambulance service or SES.

Social membership is available for all other people who do not qualify for the other categories.

Perce explained that the community at large reaps benefits from healthy membership numbers at the RSL, for the more members the bigger the income for the sub-branch and the more money is donated to veterans’ welfare and to local organisations. Prom Country Aged Care (PCAC), the Foster and Toora football/netball clubs, Foster Scouts, the Youth Assist Clinic, Foster Primary School and South Gippsland Secondary College are some of the local organisations to have benefited from donations from the Foster RSL Sub-branch.