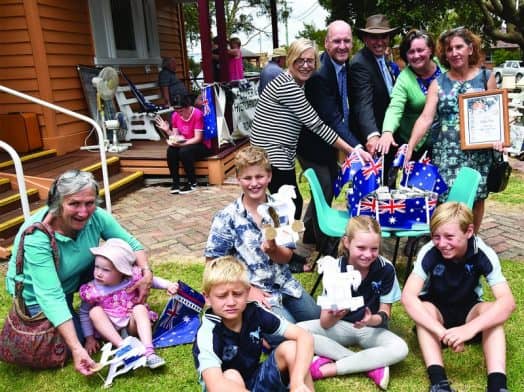 AUSTRALIA Day celebrations in Foster last Thursday culminated with the cutting of the special Australia Day cake – a lamington extravaganza – by dignitaries including 2017 Corner Inlet Citizen of the Year Debra Collins, of Fish Creek.

Deb was assisted by Meg Rogers, president of the Foster and District Historical Society, who on behalf of the society accepted the award of Community Event of the Year for the ‘Road to the Prom’ exhibition, exploring the story of the Yanakie settlement and the beginnings of tourism to Wilsons Promontory during the 1950s and 1960s.

As always, the celebrations in Foster were delightfully informal. Overseen with plenty of imagination and joie de vivre by the irrepressible head of the Corner Inlet Australia Day committee, Marg Haycroft, they took place on the lawns in front of the Foster Historical Museum.

Local band Soul Purpose entertained the crowd, which numbered 100 or more, from the verandah of the museum, playing plenty of Aussie favourites. Nearby, the historical society held a garage sale, while stalls belonging to various other community groups, including Foster Wool Group and Foster Show Society, were clustered around the library building.

Behind their barbecue the Toora Lions ensured no-one went without the traditional Australia Day snag, and there were more tasty treats from the Corner Inlet Pony Club stall.

Participants of all ages, but particularly the littlies, enjoyed a hit of cricket on the lawn. For the creatively inclined there was the opportunity to sit down and decorate Australia Day bags or make Trojan horses out of paper.

“The Trojan horses are a tribute to the pony club, which has a big event on this weekend,” explained Marg Haycroft, as she opened the formal proceedings at 1pm.

It is also the pony club that the Citizen of the Year, Deb Collins, is very involved with as a volunteer. Deb is well known around the Corner Inlet Pony Club, Bennison Adult Riding Club and West Gippsland Zone of the Pony Club Association of Victoria. She volunteers in roles on the various committees and her organisational skills and moral support are second to none. She was instrumental in improving the Corner Inlet Pony Club grounds at Bennison to be a State level course. It is now one of only three at this level in the state for horse trials. Deb’s efforts to improve the grounds put the pony club on the map, with competitors travelling long distances to participate in local events. Apart from event organising, Deb plays a pivotal role in grounds maintenance, driving her tractor to move jumps and equipment. An active volunteer in the community across many spheres, Deb has volunteered with Fish Creek Primary School and Kindergarten, the local Scout group, South Gippsland Secondary College and the Foster Show Committee. Combining her love of music and her passion for supporting people, she initiated the Foster Show Idol competition. She is a very worthy award winner.

Humbly accepting her award, Deb said that she felt very proud to be a member of the Corner Inlet community. She said that she has lived in the district since 1978 and is convinced it is “the best place in the world to live”. She added that if everyone in the community supported at least one other person it would make the world a better place.

Before announcing the Community Event of the Year, Marg Haycroft made special mention of the South Gippsland Relay for Life, which was among the nominations for Shire Community Event of the Year. In 2016 it was held for the second time at Fish Creek and raised a record $78,000. The money goes to the Cancer Council Victoria to support those affected by cancer, prevention programs and research into cancer cures. Planning is now well underway for the 2017 Relay for Life.

Accepting the award of Community Event of the Year, Meg Rogers paid tribute to Cheryl Glowrey and Mike Heal for putting the exhibition ‘Road to the Prom’ together.

“We should all learn from our history, because history does matter,” she said. The ‘Road to the Prom’ exhibition opened at the museum last March and closed on Australia Day. The next special exhibition at the historical museum will focus on the sporting history of the district. Anyone who can contribute photographs or information is invited to contact the historical society or drop material off on a Wednesday morning when the museum is open.