Home » The Mirror News » An honour to serve

An honour to serve 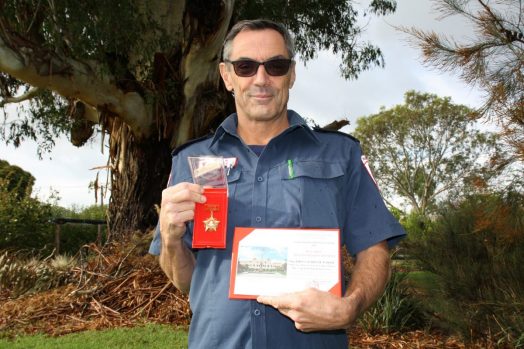 FOR Foster intensive care paramedic John Barrie being awarded the Ho Chi Minh City Badge was something astonishing – not least of all because he received an award when his wife, Karen, did not.
“When I received it, I was astonished. I thought I might get a thank you but to be honoured with the Ho Chi Minh City Badge for services to the public and community is overwhelming,” he said.
John was recommended for the award by the trauma and orthopedics hospital where he was based. But it’s a protracted process, going from being recommended to receiving such an astonishing accolade by the Communist Government.
He calls Karen, a local nursing manager and diabetes educator, the “brains behind the operation”. And he believes she is far more deserving of recognition for the couple’s work at several hospitals, along with community first aid courses the couple instituted at an orphanage in in the coastal city of Ving Tàu.
Together John and Karen offer training in midwifery, trauma, diabetes education, basic life support and advance life support as part of Victorian Health Team, an arm of Australian Vietnam Volunteers Resource Group. The charity’s motto, ‘Individuals can make a difference’, could well be John and Karen’s too.
“When Karen and I go over we’re an integral part of the team. We go over and we lecture and present in nine hospitals. When we go over we give the presentations to the doctors and the nurses on the latest techniques we’re using in Australia,” he said.
“We share information with them, about how they deal with things. They’re so resilient. Their hospitals are just so busy compared to ours.”
The couple has been involved in volunteering in Vietnam for six years, part of a network of health volunteers keen to elevate the standard of medical care in the country.
But for John the education goes both ways.
“Karen wanted to do some volunteer work, but we wanted to go somewhere that was well organized, well supported and where we would make a difference,” he said.
“We were keen to see long term change, which we have. We’ve built on the same things over the years. We can see change and we’re really helping. We’ve learned a lot from the Vietnamese too.”
John said that when he and Karen first started making enquiries about offering their services to volunteer organisations, his wife was very much in demand while he was not.
“A lot of groups wanted to utilize Karen’s nursing skills but weren’t really interested in my medical skills,” he said.
In the end they found AAVRG. The charity was founded in 1994 by Australian Vietnam War Veteran Paul Murphy, who was concerned about the condition of the social and physical infrastructure in Vietnam as a result of a protracted war and the country’s 20-year isolation from the West.
“They love to show us what they do and see what we do – and how we can marry that together,” he said.
“In a Vietnamese hospital everyone gets seen. There’ll be hundreds of people waiting to go through the emergency department and they will be seen.
“The hospitals are overloaded. There might be 700 beds, but there’ll be 1300 patients. There’ll be people on fold down stretchers and portable beds in the corridors. Having said that, we noticed this year that there were a lot of new beds.”
Road trauma and burns from industrial accidents are some of the more horrifying and confronting aspects of working in the country, John said.
“The trauma we see in Vietnam is mindboggling. The trauma the Vietnamese deal with and the numbers they deal with is absolutely incredible – it’s huge. That’s why I work in trauma in the emergency department,” he said.
John has abundant praise for the medical professionals he’s met in the country – not to mention a host of players who have made his volunteering possible. They include the Australian consulate, the Vietnamese Government, Karen, AAVRG, the South Gippsland Community for its generous donations, Ambulance Victoria for being such a supportive employer, the South Gippsland Hospital for the very same reason, and – of course – Vietnam itself.
“We love the food, we love the people and we just love volunteering,” John said.