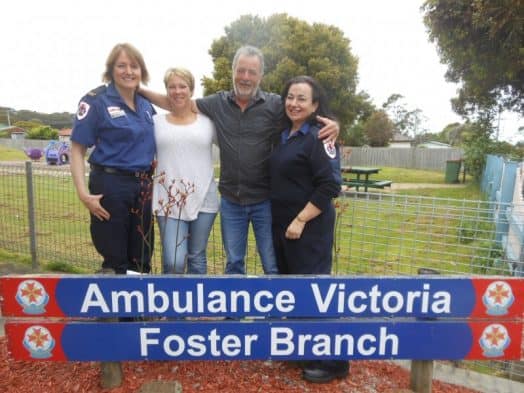 The last time Leigh, a paramedic and Senior Team Manager for the Foster branch, and Miranda, an Ambulance Community Officer, had seen Scott he was lying flat on his back, having sustained a massive blow to his head from a falling roof panel.

Scott and his fiancee, Alison Urquhart, returned to Foster keen to personally thank the ambulance personnel who they believe went “over and above the call of duty” to minister to Scott on that terrible day.

“It was important for me to come back and say thanks,” said Scott, who is only now coming to the end of months of rehabilitation following the accident in September last year.

“I’m not sure that the people of Foster appreciate how lucky they are to have such highly trained officers in the midst of their community,” said Alison. “They worked so well together, stayed calm and looked after everything.”

It was on September 19, 2015, that the call came through to the ambulance station in Foster that someone had been struck on the head by an object at Yanakie Caravan Park. Details were sketchy, but it sounded serious, with spinal injuries a possibility, so on their way Leigh and Miranda queried the availability of a HEMS (Helicopter Emergency Medical Service) chopper. Meanwhile they raced down to Yanakie, lights and sirens blazing.

“As soon as we got there, we made a basic assessment and realised the situation was serious, as Scott had no sensation from the neck down,” said Leigh.

Scott had been dismantling the roof panels of a caravan annex, when one struck him on the head. He was conscious, but when he remarked “I feel like my arms and legs are floating in the air” the ambulance officers were glad to get confirmation that the HEMS chopper was not far away.

Having in Foster-born-and-bred Miranda an Ambulance Community Officer (ACO) with excellent local knowledge was a bonus. She liaised with the chopper pilot to find the best landing site.

Scott crumpled under the weight of the roof panel, breaking his ankle as he fell, but it was the damage to his spine that was the most serious issue. Assisted by the bystanders, to whom they calmly gave firm instructions, Leigh and Miranda gently turned Scott over, put a neck brace on and parcelled him into a vacuum mattress (‘vacmat’), generously and fortuitously donated by the local ambulance auxiliary.

“They worked together very well and kept me calm by the way they were doing it,” said Scott appreciatively.

The HEMS crew were impressed that by the time they arrived about 20 minutes later the patient was all ready to be safely loaded into the helicopter and airlifted to The Alfred hospital in Melbourne.

“A series of events lined up nicely,” said Leigh modestly.

Alison was having none of that. She was extremely impressed by how the situation was handled by the two Foster ambulance officers, from their treatment of Scott to the practical advice they gave her about what to do next. “It seemed to be ‘holistic’ management of the situation,” she said admiringly.

“I think we treat people how we would like to be treated and how we’d like our family to be treated,” was Leigh’s simple response.

She added that ACOs, like Miranda, are highly trained. While they are not paramedics, they are not just drivers by any means.

In hospital in Melbourne, Scott had an MRI and a CT scan and then surgery on his vertebrae. Then followed months of rehab, with Scott having to relearn many of his motor skills. He left hospital at the end of November, but the rehab continued and is only now coming to an end a year later.

Alison rang the ambulance station a few days after the accident to thank the ambulance officers. However, the couple wanted to thank Scott’s saviours in person. With Scott now vastly improved – he still has some loss of sensation – they were able to do that last week.

“Thank you for the amazingly wonderful and supportive service you provided,” said Alison. “It is something we’ll never forget. Thank God for you guys. It is not until you need them that you realise how good ambulance officers are.”

“At the end of the day, the ambulance officers are the unsung heroes,” concluded Scott.