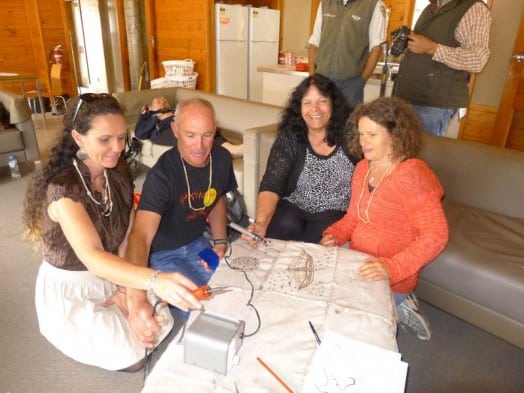 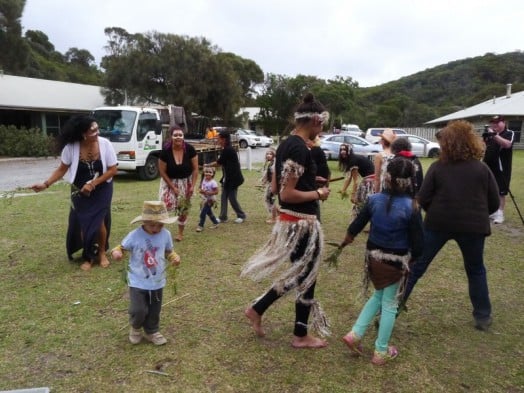 Alice Ann Pepper (second from left) and members of the Djeetgung Megai/Lidj Dancers lead visitors in a dance based upon movements made during the collection of berries.

LOCAL indigenous culture was celebrated in front of a sold out crowd at the Deadly in Gippsland Conference which was held last Wednesday, Thursday and Friday at Wilsons Promontory (Yiruk Wamoon).

Participants were inspired by the breathtaking surrounds at the Prom and immersed themselves in the theme of the event; Connected – Community, Family, Culture, Land and Youth.

‘Deadly’ is a word used to describe something that is excellent and outstanding, and the conference was a way of celebrating the deadly work being done by Aboriginal people every day – and about banding together and achieving recognition in partnership.

The event was hosted by South Gippsland Shire Council with the aim of the Planning Group to create a space where Indigenous culture was celebrated and where connections could be strengthened and developed,”

“The original vision was to hold an Aboriginal peoples’ conference that would allow Gippsland to tell its own stories, spread the word about the positive things happening here and build on and strengthen the relationships between community, local organisations and government who are working together to achieve great things in Gippsland,” said Council’s Community Strengthening Co-ordinator, Ned Dennis.

“ Ï truly believe this was achieved,” he added.

The first conference was held in 2009 at San Remo and has continued strongly since then. The event travels around the Gippsland region, which is the perfect way to showcase the local depth of indigenous culture.

A feature of the event is the burning of the date on the message stick. The stick is a form of communication traditionally used by Indigenous Australians that is passed between different clans to transmit messages. The message stick is passed onto each new conference host.

Event organisers are currently preparing a short film and photobook of the event which will be available early next year.