Home » The Mirror News » A thank you to the whole community

A thank you to the whole community 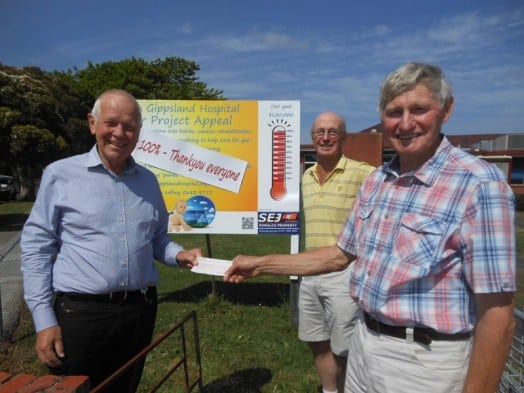 • Standing in front of the South Gippsland Hospital Solar Project Appeal sign, hospital CEO Peter Rushen (left) happily accepts a cheque from the president of the Fish Creek Bowls Club, Duilio Stefani, which brings the appeal total to its target of $120,000. Also pictured is Lloyd McKenzie, whose family sponsors the Corrie McKenzie Charity Day at which the $700 plus which completed the appeal was raised.

WITH the Fish Creek Bowling Club donation this week of just over $700, South Gippsland Hospital reached its Solar Project fundraising target of $120,000.

On behalf of South Gippsland Hospital, CEO Peter Rushen thanked not only the bowls club but all the individuals, businesses, groups and organisations that have contributed to the outstanding success of this campaign.

Just a few short months ago the hospital sent out an appeal to the community to help it fund a solar energy project that would not only save the hospital thousands of dollars a year but enable those funds to be channelled back into clinical care services.

Mr Rushen said, “We’ve been overwhelmed by the response of the community. Not only their generosity, but how quickly they responded to our call to make this project possible in time for summer. Behind the scenes a panel has been busy assessing proposals from a number of solar specialists around our region and I’m pleased to announce that ‘Gippsland Solar’ has been appointed to supply and install the solar electric system.”

Mr Rushen also said that when both the works and the honour board are completed the community will be invited to help ‘throw the switch’ on the new system.

The president of Fish Creek Bowls Club, Duilio Stefani, said that the donation from the bowls club was raised on the Corrie McKenzie Charity Day, held this year on October 11. The McKenzie family sponsors the day each year in honour of Corrie, who Mr Stefani described as “a colossus of her time”. During her long association with the club (1970-1995) she was club champion nine times. Each year the Charity Day raises money for the hospital and this year was no exception.

Although the Solar Project Appeal target has been met, donations to the hospital are always welcome in support of equipment and services.