Home » The Mirror News » A grand plan for Toora

A grand plan for Toora 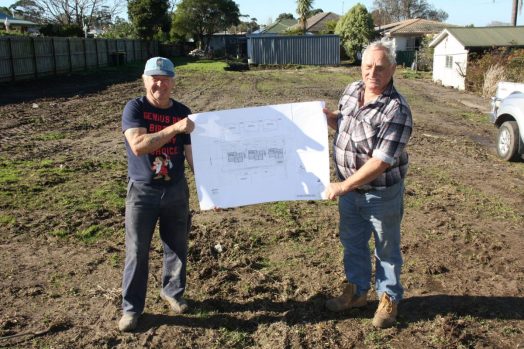 THE Toora Lions have levelled a block on Harriet Street in readiness for the construction of three aged care units.
It’s part of an expansive plan. There are already three Lions-owned units next door, built between 1994 and 2000. Future plans include the possible purchase of a house next door to the vacant block – with a long-term vision to establish something of a precinct in the town.
Toora Lions president Hans Van Kuyk and friend John Spooner – himself a former member and president of the club – believe it’s a way not just to look after the elderly but also continue to expand the group’s charitable works.

While the outlay is large, the rewards are too.

“So far it’s all paid for, the plans are all drawn up. The rent from the six units will pay off anything owning,” Hans said.
John said the “old people are going to come out in front”.

“That’s the whole aim of it. We’re all getting a bit older and we’ve got to have somewhere to go,” he said.
Hans said the club was carrying on the work of past Toora Lions committees.

“Our best money spinner is the Foster Market, but the unit money is kept separate from what is dispersed to the community,” he said.

“We handed close to 20-odd thousand dollars in the past year. Between the community bank (Bendigo) and us, to hand out about $70,000 in a town of about 500 people, is not bad.”
Asked what the new units will mean to the town, John jokes: “We’re getting old too. We need somewhere to go.”

“Seriously, we hope people don’t have to leave their own community, we’re some of them have grown up and don’t know anywhere else,” he said.

“I think that’s a big thing in old age. You’ve got somewhere to go and you’ve got something that’s tailored to you.”
Hans said there was already interest in two of the units and the others, aside from a short period, had always been occupied.
John said the construction of the units was a pet project for him. Even though he’s no longer an official Toora Lions Club member, he is still keen to help out.

“I wanted to be in the scene all along here. I still do a certain amount of firewood too (splitting and delivering to pensioners who can’t afford to by it or turn on their heaters). The Lions need all the help they can get,” he said.
“Hans is the youngest fella at 70. I’m 73. You can’t walk away from helping people.”