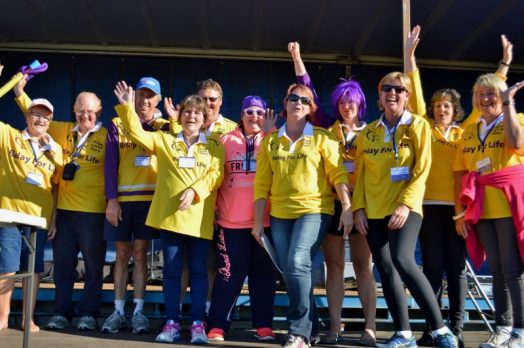 The Relay for Life organisers!

THE 2017 South Gippsland Relay for Life was held at Fish Creek over the weekend and raised an incredible $66,258.85 to fight cancer in Victoria. This brings the total that South Gippsland has raised over the past 12 years to more than $500,000, with $180,000 of that having been raised in the last 3 years.

More than 500 walkers and supporters braved the breezy conditions to participate in an array of activities that continued for 18 hours. A host of carers and survivors completed the first lap of the relay and were then joined by other members of the 20 teams to keep their batons passing all through the night. Walkers were taken on an emotional roller-coaster ride as they listened to heart-warming and heart-breaking stories from all corners of our Shire as brave carers and survivors openly shared their journeys.

One of the most moving and emotional parts of the Relay was the Candlelight Ceremony. Walkers listened to Marj Arnup take them through her cancer journey, as she honestly described the highs and lows of her treatment regime. They listened to Amanda Bier’s poignant song tribute to her mother’s partner, who lost her cancer battle only last Saturday. The incredible support that was given to Team “H 4 H” throughout the weekend helped to ease their pain, and this is a huge part of what relaying is all about. It is not just about the money; the opportunity to give and receive emotional support, to know that it is not a battle that needs to be fought alone, is an essential message that the Relay gets across.

Walkers were joined on the track by a man who was participating in his 556th Relay. After witnessing members of his own family going through their cancer treatment, Michael was diagnosed himself with cancer at age 22 and given six months to live. After his recovery, the RFL became his passion and he devotes much of his time to participating all around the country and sharing the hope that cancer can be eradicated.

Teams who raised more than $5000 were awarded Research Grants, where they can direct their funds to a specific research project of their choosing. Team Organiser, Claire Buckland, presented these awards to five teams, with Burra Flames taking the honours for the highest amount raised. As Claire pointed out, every dollar raised by every team goes to fighting cancer in our own backyard, making it more personal for all who participated.

Relay Chairperson, Irene Gale, invited those present to continue the fight and offer support to the next town in South Gippsland to take over the baton for the next three years. Irene reminded walkers that their efforts are making a difference and that it is still important that we provide support for whichever town takes on the Relay next.