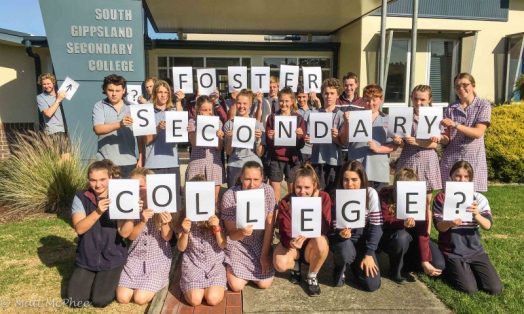 THE local secondary college is considering a name change and is keen to gauge the views of as many people as possible through a community survey.

He began by saying: “Ask a student from South Gippsland Secondary College which school they go to and chances are they will answer ‘Foster Secondary.’ Whilst the members of the local community know the location of our great little school, not many others do and there is little idea from our name.”

Mr McPhee said that 14 years ago the school council underwent a major review of the school name and investigated alternatives to the name ‘South Gippsland Secondary College.’ After much work and consultation, it was decided to stay with the existing name at that time.

“In 2016 however, the issues prompting that review have not gone away and many at the school believe the arguments supporting a change have only become stronger in the intervening period,” said Mr McPhee.

So what are the arguments for a change?

The first reason, said Mr McPhee, is possibly the most significant and could be described as ‘location confusion.’

The second reason relates to the length of the name.

“It is very long when quoting email addresses,” Mr McPhee pointed out. “[email protected] is a mouthful when answering phones and filling out the hundreds of forms we need to use each year printed on letterheads, uniforms and other school property. This may sound a trifling reason, but when staff are doing it all day every day, it would be nice if it was shorter.”

“Thirdly, our ‘identification’. Who are we? It is very important for the name change idea not to be seen as some kind of ‘appropriation’ of the school by the township of Foster. We are one of the few rural secondary colleges in the state that are not named for the town that we are located in. All other government secondary colleges in South Gippsland are named for the town where they were established, so they never experience confusion as to where they are located and ‘who’ they are. All of them have feeder schools from other towns within their area, but don’t have that reflected in their names. For example, Wonthaggi Secondary College has students enrolled from feeder schools as far apart as Inverloch PS, Cowes PS and Bass Valley PS.

“The South Gippsland Shire covers a very broad area from Nyora, Venus Bay, Yanakie, Mirboo North and as far east as Hedley. The shire has four government secondary colleges in its area, being Korumburra SC, Leongatha SC, Mirboo North SC and ourselves. There seems no logic to the fact that only our school is named to represent the whole shire.”

Finally, said Mr McPhee, it is worth considering the history of the school name. “‘Foster’ has been part of the school name for 70 of our 97 years. Originally we were named the ‘South Gippsland Shire Higher Elementary Memorial School.’ We were then named ‘Foster Higher Elementary School’ until 1952 when we changed our name to ‘Foster & District High School.’ This name survived until 1990, when the current name ‘South Gippsland Secondary College’ was adopted.”

If a new school name was to be adopted it could also be an opportune time to look at a new logo, introduce some new items into the uniform range and possibly drop some of the older items. Any uniform changes would be phased in so that students could ‘wear out’ their current uniforms. The school is determined to avoid unnecessary costs on families.

In considering a potential name change that would address the issues considered above, the sub-committee recommends the name changing to Foster Secondary College.

Where to from here? A consultation process will take place, as is required by the Department of Education and Training, and the Name Change Sub-Committee has created a survey that will be conducted online. The link to the survey is:

The link will also be sent out to the school community via Compass, the school management portal. Respondents are asked to identify which ‘category’ they belong to for data collation purposes – student, staff, parent, community member or community organisation. The data will then be considered by School Council as a whole. Any decision must have the approval of the Department of Education’s regional director, Stephen Gniel.