Home » Uncategorised » Our Community Bank invests in our community

Our Community Bank invests in our community 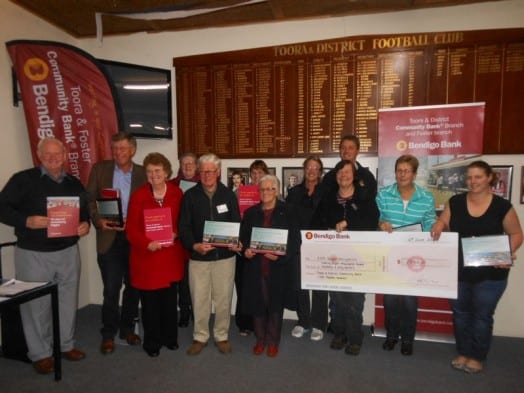 LIVING up to its name, the Toora & District Community Bank and Foster Branch has distributed more than $28,000 to community projects across the Promontory district.

“This is what we love doing – giving our profits away,” said the chair of the Promontory District Finance Group Ltd, Rob Liley, at the bank’s annual presentation night, held last Tuesday at the Toora Football Netball Club function rooms.

“We don’t give money away so much as invest money in the community,” corrected fellow director Llew Vale. “We are proud to be enablers, and on nights like tonight we get a charge out of organisations telling us what they use the money for.”

The grant recipients were pleased to oblige. As each stepped up to receive a cheque, they outlined their plans for the money that was being so generously invested in their club or organisation.

Expressing gratitude on behalf of the Dumbalk community, Bev Hanley said that the Dumbalk & District Progress Association was in the midst of converting the old kindergarten and infant welfare centre at Dumbalk into a community centre with a focus on allied health services. The $2000 from the Community Bank will go towards the purchase of a defibrillator.

Howard Plowright from Foster and District Historical Society said that the vault at the Foster Museum needs to be kept at a steady temperature to store items of historical significance, and the museum needs to be kept warm for the comfort of visitors and volunteers. The grant of $2000 from the Community Bank will go towards the purchase of a solar electricity system (hopefully with additional money from South Gippsland Shire Council).

On behalf of the Foster Photography Club, Mary Shaw was delighted to accept a grant of $1000 for a high resolution projector and screen, to be shared with the local University of the Third Age (U3A) group.

Carmel Van Kuyk was thrilled with the handover of $5000 for a kitchen upgrade for the Arthur Sutherland Recreation Reserve at Welshpool. She said the committee has been hard at work for several years upgrading the basketball stadium, where more than 100 children, as well as adults, play basketball each week. The kitchen is an important facility and is used for fundraising efforts, too. The reserve is also home to the Prom Coast Soccer Club.

Kelly Boyd from the Toora Netball Club thanked the Community Bank representatives for their investment of $5000 in a new playground for the Toora Recreation Reserve.

The president of Sandy Point’s TP Taylor Reserve committee of management, Dianne Cooper, was happy to receive a grant of $2000 towards the purchase of solar panels. She said that the committee is planning to purchase a 10kW system for a total cost of $18,000, which will hopefully result ultimately in cheaper electricity costs and encourage more people to make use of the Sandy Point Community Centre.

Thanking the Community Bank representatives, Darren Lomax, president of the Foster Football Club, said that a new computer, purchased with the help of a $1360 grant from the Community Bank, should make the job of club secretary Sandra Binding a lot less stressful.

The largest grant of all went to the Youth Assist Clinic run each week by the South Gippsland Hospital, though a representative was unfortunately unable to attend the presentation night. “Without our ongoing support they wouldn’t be able to run this program,” said Rob Liley, announcing that the clinic would be receiving $10,000 from the bank, which has supported it since its inception. “It fills a real need and we’re very proud we can do this for the kids of the area.”

Mr Liley said that the difference between the Community Bank and the big four banks is that for a large part the profits go to the community rather than to shareholders. He said that in the 16 plus years the bank has been in operation at Toora, around $800,000 has been redistributed to community projects.

Mr Vale pointed out that the more people do their banking with the Community Bank, the more money becomes available to invest in the community.