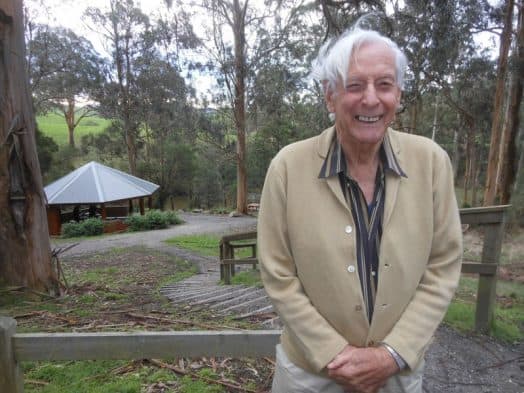 Peter Lee OAM at Agnes Falls Scenic Reserve, where he has made a significant difference as a leading member of the Friends group.

HIS distinguished service to the community of South Gippsland has led to Agnes resident Peter Lee being awarded a Medal of the Order of Australia in this year’s Queen’s Birthday Honours list.

Peter is perhaps best known these days as the driving force, with partner Kathy Whelan, behind the Friends of Agnes Falls, but he has played a leading role in a wide range of community groups since he moved to this district more than 20 years ago.

When he retired to South Gippsland at the age of 66, after a lifetime involvement in business and community affairs in Melbourne and Queensland, Peter planned to go fishing and play golf, but he quickly became involved with the Toora and Welshpool communities. As a result, he has only taken his boat out twice and played five games of golf in 20 years!

Peter said he was humbled to be awarded the OAM, which he certainly hadn’t been looking for. It was never in search of reward that he became involved in community activities, he said, for they were their own reward.

“I’ve loved every minute!” he said of his long involvement in Corner Inlet community life.

When Peter first moved to Agnes in 1995, word of his business acumen and community spirit soon got out, and he was invited to join the Toora Progress Association (TPA) by Toora resident (and now shire councillor) Jeanette Harding.

When the TPA received a grant to build a bird hide on the Corner Inlet foreshore, Peter made and mounted frames for the display posters in the bird hide and helped out at working bees.

Most notably, he was instrumental in the move of the regular TPA markets from Toora’s main street to the highway, which resulted in many more visitors to the markets and greatly increased the funds raised for the community. The highway markets raised an estimated $70,000 for the Toora community while they were in existence and helped to provide the funding for many of the TPA projects undertaken in Toora, bolstered by shire community grants.

Having developed a 100-acre tropical fruit orchard in Queensland some years before retiring to South Gippsland, Peter’s expertise was invaluable in designing what became the Toora Heritage Pear Orchard on a vacant block of land in Mill Street in 1996. Peter worked alongside Ian Brothwell and Charlie Barnett. On the day of the first plantings, despite being not far off 70, he got up at 6am and dug 94 holes by hand. He mowed and sprayed the orchard on a regular basis until 2006.

The Welshpool and District Horticultural Society was another of Peter’s interests for many years. As well as acting as a steward of the veggie section at the spring and autumn shows, he redesigned and printed the competition schedules and was instrumental in reinvigorating the shows by changing them from a weekday (Wednesday) to two-day events running from Friday to Saturday.

Peter also assisted with the revitalisation of the King of the Mountain Festival at Toora and its later development into the Prom Country Challenge, during the mid-2000s. He helped set up many of Toora’s community Christmas carnivals, until ill health curtailed his involvement. He was diagnosed with dilated cardiomyopathy in 2004. This prompted him to become actively involved in the Cardiomyopathy Association of Australia and he served as secretary from 2005 to 2008. With the aid of a pacemaker he gained a new lease on life and his involvement in local community life continued.

Peter has been a member of the Toora Railway Reserve Parkland Development Advisory Committee since its inception in the late 1990s, and he was the president of the Foster branch of the Victorian Nationals for 15 years until 2013. Lately, however, the overwhelming majority of his community involvement concerns the Agnes Falls.

“I live and breathe it at the moment,” he said.

In 2012 Peter was a founding member of the Friends of Agnes Falls Inc. As Vice-President, a role he holds to this day, he helped the group lobby for further improvements to the somewhat neglected grounds, resulting in a $180,000 State Government Regional Growth Fund Grant being made available to Parks Victoria for the construction of a new toilet block, picnic shelter and extra picnic settings.

In 2013, just prior to his 84th birthday, Peter volunteered to build a new picnic table for the scenic reserve at the falls. He was as good as his word, and in 2014 a magnificent white cypress picnic table was duly installed beside the Agnes River.

The Friends group, Peter and Kathy (who is secretary) in particular, have worked marvels at Agnes Falls, their efforts ensuring that more people than ever come to South Gippsland to visit this stunning natural attraction.

Peter Lee OAM has certainly made a difference to his community. What is more, he has shown that age is no barrier to being a passionate, committed and active volunteer.

Peter is expected to receive his well-deserved Medal of the Order of Australia at a ceremony at Government House in a few months’ time. Remarkably, he will be the second member of his family to be so distinguished, his elder brother Neville already having an OAM (as does Peter’s partner, Kathy Whelan). Community service definitely runs in the family!