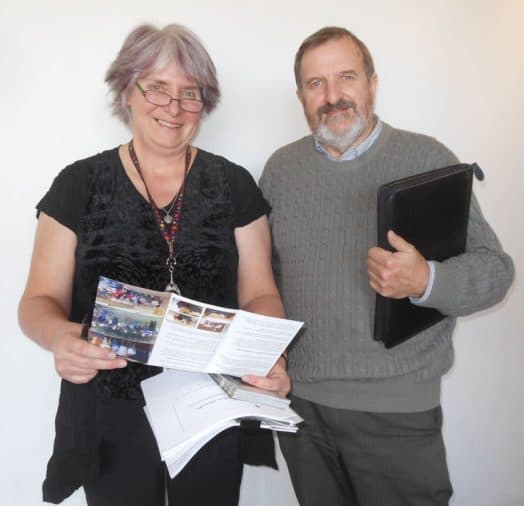 MEN’S Sheds are a place to build on the health and wellbeing of men.

That’s one of the messages in a recently produced colour brochure, Men’s Sheds South and West Gippsland. It was in recognition of the important role Men’s Sheds play in men’s health that Monash Health contributed to the production of the brochure, along with local government, including South Gippsland Shire Council.

“Men’s Sheds are places for men to come together, to capture and share their skills and experiences,” explains the brochure.

“A place of creativity, of teamwork, and for celebrating community spirit…More than just a ‘shed’ we meet new friends, relate our experiences, mostly with a laugh, sometimes with compassion for someone going through a hard time, but we always leave feeling better than when we came.”

Shire community strengthening officer Barbara Look said the regional brochure was a resource much appreciated by health services and medical practitioners. “It is also a great promotional tool!” she said.

Ms Look was speaking at a public presentation to Council last Wednesday on the South Gippsland Cluster of Men’s Sheds. She was accompanied by representatives of two of the shire’s Men’s Sheds – Graeme Green from the Corner Inlet Men’s Shed in Foster and John Hyett, president of the Venus Bay and Tarwin Lower Men’s Shed.

Both men spoke with great enthusiasm of their Men’s Sheds and of the support they received from Council, Barbara Look in particular.

Mr Green said that the Corner Inlet Men’s Shed originally came under the auspices of Foster Community House, but having become incorporated in 2015 it was now in the process of taking over the licence for the Men’s Shed site at Foster Station Park.

“In 2013, with the generous assistance of the South Gippsland Shire, though a grant of $10,000, we successfully applied for a grant of $60,000 for the construction of a new shed in Foster Station Park on the old railway station platform,” he said.

The shed is now almost complete, missing only the installation of tactile tiles for the ramp.

There are currently 25 active members, who attend the Corner Inlet Men’s Shed on Mondays and/or Fridays.

The major physical activity of the Shed is woodwork, with a metalwork shop proposed as a future development, but socialising is equally important.

Fundraising is mostly through Bunnings sausage sizzles, augmented by craft sales during the Foster craft market season and commissioned work.

The Shed has just received a grant of $5000 from the Department of Social Services towards the purchase of a mower.

“Future plans include formal training in the use of workshop equipment to the community at large, the establishment of a women’s evening/day and a separate session wherein members can work on their personal projects. We also want to open the social area to other community groups for meetings, etc,” said Mr Green.

Mr Hyett said that he had joined his local Men’s Shed upon retirement. Having moved from Melbourne not long before, he found it an excellent way to meet people in the Venus Bay/Tarwin Lower area – and then beyond via the Cluster meetings.

There’s an open invitation for all men to come and share in the camaraderie of their local Men’s Shed. Across South Gippsland, there are Men’s Sheds at Meeniyan, Leongatha, Korumburra, Mirboo North and Nyora, as well as Foster and Venus Bay/Tarwin Lower. The newest Men’s Shed is at Sandy Point.