Home » Uncategorised » Lions get ready to roar at Toora factory

Lions get ready to roar at Toora factory 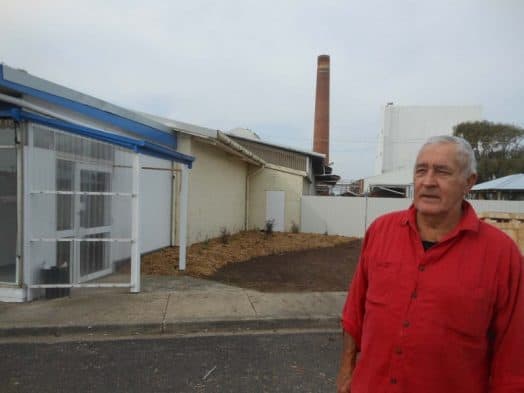 • Jeff Unthank from the Toora Lions Club at the front of the Viplus Dairy factory, where the grounds have been landscaped and the old shop area thoroughly refurbished to make way for a dairy museum, the Lions and other community groups.

VIPLUS Dairy Pty Ltd is going all out to support the local community by thoroughly refurbishing the former store area at the front of its Toora factory so it can be used as a dairy museum and multi-purpose public space.

The Toora Lions will be major beneficiaries of the refurbishment. The club already makes use of the main hall in the building. For 12 months or so the Lions have been storing furniture and other items in the huge space. More recently, the front rooms have been renovated, the old asbestos floor tiles removed, the flooring replaced and the walls and ceilings repainted. The plan is to turn one of these areas into a ‘Lions’ Den’ for service club meetings. There will also be the opportunity for other community groups to make use of the rooms.

“It will be great for the community,” said Lions president John Spooner. “We need the community to provide input as to how best make use of all this space.”

Inside and outside there are improvements. In recent weeks the gardens at the front have been landscaped to make a more appealing entrance to the public space.

Preparations for an official opening of the revitalised community facility are now going ahead.

The company appears to have put past troubles behind it and turned over a new leaf. Viplus Dairy has issued an official apology for underpaying two Taiwanese backpackers in an incident which saw the company hauled before the Fair Work Ombudsman. Viplus Dairy signed an Enforceable Undertaking to encourage behavioural change and ensure future compliance with its workplace obligations. Fair Work Ombudsman Natalie James said the employer had co-operated with the investigation, repaid the employees and revised its workplace practices.

It was all systems go when ‘The Mirror’ visited the Toora factory last week. The factory car park was brimming with vehicles and workers were signing in and out, for it was right on shift change. There are now 46 employees at the factory, employed for the most part in two five-day (Monday to Friday, 6am to 2.30pm and 2.30pm to 11pm) shifts to produce baby formula and nutritional powdered milk products for export.

“We’ve been super busy,” said admin officer Sue Hamer. “We’re meeting demand and growing. We currently have seven seamers [machines for sealing steel cans] and are about to get five more, which will almost double our capacity. We can punch out 50 cans a minute.”

The factory exports to China and Vietnam and is negotiating with Indonesia and a number of other Asian countries. A delegation visiting from China was just leaving as The Mirror arrived, and Ms Harmer said there had been another delegation earlier in the week.

Ms Harmer said Viplus Dairy management was looking forward to sharing the refurbished front of the factory with the community and opening the dairy museum. “It’s come on beautifully,” she said proudly. Many items for exhibit are already in storage, but more dairy exhibits would be welcome. “We’d like as much memorabilia as we can get,” said Ms Harmer.

She is looking forward with great excitement to the opening of the museum and community public space. This is set for May 12, and will hopefully involve a maypole, a town crier, a band and much more. It is planned to be a ‘Back To’ the factory as much as anything else, with major community involvement. “Most of the town has worked here at one time or another, after all, so lots of people have a connection to the factory,” said Ms Harmer.

Anyone who has exhibits suitable for the dairy museum is invited to contact Sue Harmer at Viplus, tel. 5686 2388.