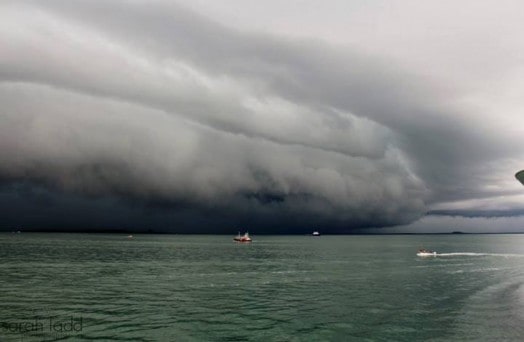 Bureau of Meteorology has news ways to keep up with coastal wind warnings.

Blow by blow: How to keep up to speed with the Bureau’s coastal wind warnings

The strong winds, roiling seas, and jagged rocks that line Australia’s 36,000km coastline have claimed more than 8,000 vessels since the Tryall, a ship of the English East India Company, gained the dubious distinction of becoming Australia’s first official shipwreck in 1622. In those days, crews took to sea with nothing but rudimentary charts and their own intuition. Today, modern forecasting and real-time communications mean that mariners need never be out of range of lifesaving weather forecasts and wind warnings.

By the end of 2014, the Bureau’s Next Generation Forecast and Warning System will cover the entire Australian coast, using a high-resolution weather forecasting system that documents individual elements – from wind and swells to cloud cover and humidity – in areas as fine as 6x6km grid cells. The new system enables meteorologists to refine local-area forecasts according to specific coastal conditions and evolving weather patterns. The good news for Australian mariners is that detailed wind, wave and weather forecasts are now available out to 60 nautical miles, or 110km, off the mainland.

Through interactive tools such as MetEye and the Bureau’s weather and wave forecast maps, skippers can ‘drill down’ to specific locations along their voyage plans to see how the weather is likely to develop. While out on the water, most mariners rely on VHF weather reports compiled by coastal radio stations, which use the Bureau’s marine forecasts for their regular broadcasts.

Strong-wind warnings – arguably the most important safety check for anyone going to sea – are issued whenever the wind exceeds 26 knots, and repeated on VHF radio every six hours until conditions subside. With the rollout of the Bureau’s new forecast system, wind warnings are now issued up to 42 hours before a storm hits – when most storms are still about 1500km away!

The Bureau issues four levels of warnings: for Strong winds, Gales, Storm Force and Hurricane Force winds. Forecasts generally describe how strong the winds will be, in which locations, when they will arrive and subside, and what direction the wind will come from – a critical factor in determining where boats can safely seek shelter.

*Wind gusts can be up to 40% stronger than the reported average wind speed.

Of course, it is up to individual skippers to know precisely what wind conditions their vessels can handle. Strong winds usually cause rough seas that make boat handling difficult, and can swamp smaller vessels. They can also bring squally conditions, which can rip sails off masts, or even overturn boats.

Keeping ahead of wind warnings and activating timely operating restrictions are vital for ensuring the safety of your passengers and crew. Most coastal radio stations provide regular local forecasts on VHF radio, with instructions and broadcast times announced regularly on Channel 16. For vessels travelling beyond 30 nautical miles offshore, the Bureau broadcasts its high seas forecasts every four hours (and warnings every hour) on HF radio, and over theInmarsat satellite system.