Farmers joining environmental movement in their fight against mining 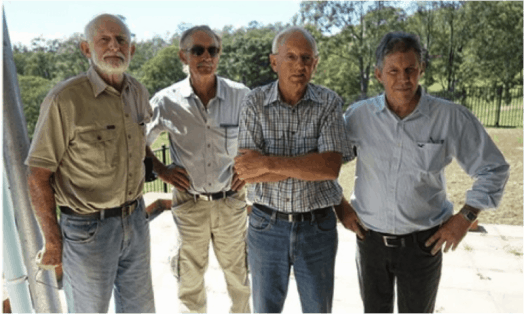 There is a strange political alliance building in this country, one that governments and major parties will do well to consider.

It is the alliance between farmers and the environmental movement on land use issues around coal seam gas and mining.

It has the capacity to change the political landscape in rural Australia and leave a scar as gaping as an open-cut mine on the (predominant) Coalition support.

In rural towns, farmers are joining fellow community members, environmentalists and, yes, the hippy fringe to stop developments of coal and unconventional gas extraction in their neighbourhood. The hot spots are around Bentley, the Pilliga, Gloucester in New South Wales and the Coonawarra in South Australia.

It has become clear the opposition is not coming just from a tie-dyed fringe but also includes very conservative people who do not join the political fray easily. Farmers are now chaining themselves to mining equipment to make their point, a tactic associated by farmers in the past with the “feral” end of the green movement.

For better or worse, farmers carry a political capital in Australia that adds a powerful punch to the campaign. Liberal party pollster Mark Textor, whose firm lobbies for the Australian Petroleum Production and Exploration Association, acknowledged as muchwhen he decried the emotional nature of political debates.

“Australian agriculturalism – characterised by the fervent belief that farmers are always ‘right’ and ‘good’ – is actually about the few limiting the land-based access of the many to the energy independence and greenhouse reductions that unconventional gas has brought to the US,” he said.

That reality is what has made the Lock The Gate movement so powerful. It has turned a whole lot of small communities into a large voice, providing strategic support to get their message to governments and mining companies. 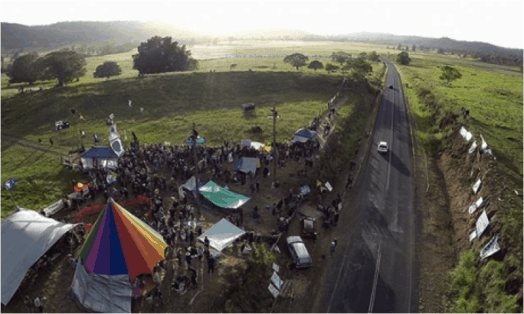 The Bentley blockade which is campaigning against Metgasco’s gas exploration in the Northern Rivers district of New South Wales. Photograph: David Lowe

Consider the story of one farmer, one of many, who has decided to speak out. Robert Lowrey lives at Bentley in the Northern Rivers of New South Wales, upstream of Metgasco’s gas exploration on a farm belonging to a near neighbour Peter Graham, a former Lismore councillor and National party member.

Lowrey’s father, the elegantly-named Dunbar Lowrey, was chairman of the Bentley National party branch. Robert Lowrey and his wife, Nanette, have the family farm that transitioned from dairy to cattle during deregulation. He describes the farming community around the town as extreme conservatives, “old school” farmers who are reluctant to take a stand.

Yet he has joined up with a friend and fellow farmer Tony Davis to write a letter to the local paper. Davis initially agreed to have a test well on his place, based on Metgasco’s claim the gas would be used for a power plant for Casino. However, once he discovered larger plans, including plans for export, he backed out.

They both thought long and hard about entering public debate, especially as they were horrified to hear stories that Graham had been treated badly by a small element of the anti-gas campaign. But they wanted to speak out, he says, partly to counter the view that all the opponents were “long-haired layabouts with nothing better to do”.

So Lowrey wrote a letter with Davis to the local paper to point out their opposition to Metgasco’s development, while maintaining support for the Graham family. He ran the letter past 37 other farmers. Of those, 34 offered their support, although they did not sign it.

“When we first heard about the gas, it was about a few wells, a power station for Casino and long-term jobs,” the letter says. “Some of us accepted, even welcomed, test wells on our properties.

“Now we hear about hundreds of wells, pipelines over the ranges, fracking, suspicious chemicals ruined farms, polluted waters and valleys destroyed. Could our valley end up looking like an industrial wasteland? This makes us worry about a lot of things.

“We are worried about the Graham family. They have been our fellow farmers, workmates and friends for decades. Their farm may be the centre of the dispute, but it could easily be one of ours. They need our support, they do not deserve abuse.

“The drilling must stop, the risks are too great. We only have one chance and, if it goes wrong, it is our children, not the mining company, who will bear the consequences.”

Lowrey’s argument is there is no need for gas in the region, given the area’s “good fortune” that provides an environment for clean food production and tourism. Gas extraction development will be such a shame, he says, especially given the Northern Co-operative Meat Company has just started certifying grass-fed beef and the company is “just 10 miles away from the dirty thing”. The closest large town to Bentley is Casino, which markets itself as the beef capital of Australia.

Both agree local farmers have been slow to join the environmentalists, whom Lowrey describes as “protectors” rather than “protesters”. They are also emphatic they do not speak for all farmers. They were just spurred into action after doing their homework.

In some ways the anti-mining campaign has the hallmarks of any big power battle. Governments and large companies came into small communities offering jobs and riches. Football teams were sponsored. Social compacts were made. Then when resistance was met, they tried shouting, which only made things worse. Lowrey says former New South Wales Liberal minister Chris Hartcher came to town for a public meeting.

“Chris Hartcher told us we were anarchists trying to wreck the state’s economy,” Lowrey says. “Nanette was angry. I would just say this household’s personal response is we have been contributing to the economy for 150 years.

“We don’t consider ourselves an elite group. We are just here doing what we set out to do over 100 years ago.”

Just this week, another New South Wales government representative came to town to test farmers’ knowledge, to check they were not reading silly fear mongering on social media.

“I don’t even know how to turn a computer on,” Lowrey says. “I can read Joseph Conrad but not a computer manual. I assured them I was not swayed by social media.”

When the officials go away, the communities are left talking and sharing stories. They have a personal stake in the outcome, as well as the capacity to organise around kitchen tables. That’s the same place Indi independent federal MP Cathy McGowan started. The same place so many campaigns start in small communities.

The kicker in the story is what this episode has done to political support. Of the farmers and smaller block owners I’ve spoken to, all were National party voters. All say they will be looking to shift their vote elsewhere. They feel like they have been betrayed after many years of support. Lowrey’s response is typical. His father was proud to have a visit from National party leader Sir Earle Page in his little Bentley branch. Now the son has forsaken the party. All parties.

“The political process is being broken down by nepotism and other interests able to bring to bear power through lobbyists, large amounts of money and very persuasive argument,” he says. “As our system becomes more dependent on money, it becomes vulnerable.

“I am sick of parliamentarians taking material they had access to as ministers and peddling it, taking up positions in industry.”

He names former Labor federal resources minister Martin Ferguson, now a director of British Gas, and former National party leaders John Anderson, a former chairman of Eastern Star Gas, and Mark Vaile, who is on the board of Whitehaven Coal.

“It’s moving people away from conservative ordinary politics and interest in National party [here] is waning,” said Lowrey. “People are weighing up alternative parties. Some, quite a few, are going to the Greens.”

They may not move their vote. As a National party MP said to farmers in the Pilliga: “Who else are you going to vote for?” But what is clear from this debate is it will not get easier for governments or mining companies.

For there is nothing so stubborn as a farmer.