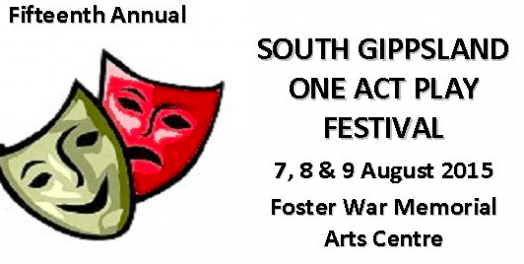 Come for a play, stay for a day or pick and choose with a festival pass

A one act play festival gives the chance for a friendly theatrical competition. You can see new plays, support your friends, meet new people and be thoroughly entertained.

It’s an exciting prospect when theatre companies from all over Victoria come together with the opportunity to showcase their talents to an audience not normally available to them and it’s also a marvellous chance for local people to see some wonderful theatrical talent close to home and without spending a fortune.

FAMDA hosts its fifteenth one-act play festival 7 – 9 August at the Foster War Memorial Arts Centre and you are invite to come and sample some (or all) of the amazing array of theatrical entertainment on offer.

For the maximum convenience of playgoers FAMDA has organised in-house catering for the weekend.
You can buy soup and a roll from the hall kitchen for a quick, tasty, hot lunch each day.
Devonshire tea will be available throughout each day and supper will be served during set-up times on Saturday night.

To allow time for more socialising on Saturday evening, and to ensure that everyone is able to get their meal on time, FAMDA has arranged in-house catering at the Foster Arts Centre with dinner being served between 6:00 and 7:30.

Our talented and friendly catering team has created a barbecue style menu (with vegetarian options) at a nominal cost complete with salad and desserts.

Check out the Menu and please contact Annette Walker via [email protected] or  5682 2151 by Wednesday 5 August to indicate what would like to order so that the caterers will have some idea of how many of these tasty morsels they will need to prepare.
Foster vignerons, Graeme and Georgia Wilson of Windy Ridge Winery, will be on hand during dinner providing an interesting selection of local wines by the bottle or by the glass.  (no b.y.o. with dinner).

The Festival has 24 adult entries as well as 7 plays in the Saturday morning Youth Festival.
A Festival Pass costs just $25 and entitles you to see every play in the festival if you wish.
The Festival is divided into sessions, each with at least 4 plays. A session ticket costs $10.
The Youth Festival admission price is $5 for adults and children are free.
Tickets will be on sale at the door prior to each session and between the individual plays.

The generous prize money made possible by sponsorship from the Toora and Foster Community Bank branch of Bendigo Bank, has enticed several Melbourne theatre companies and others from the wider Gippsland area and other parts of Victoria to bring their plays to South Gippsland.

To encourage more youth participation, this year the South Gippsland Shire Council allocated $500 sponsorship, allowing us to increase both the number and the value of the awards in the Youth Section which will be held on Saturday morning.