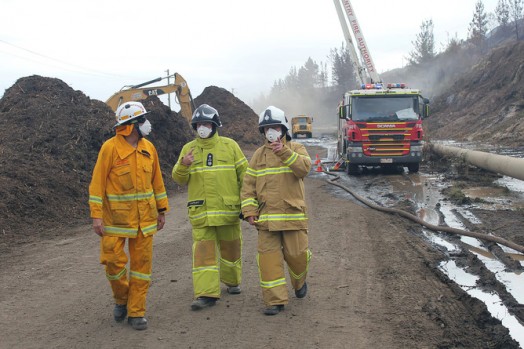 I’m quite nervous about writing this. I’m going to stray from my familiar academic world into a political one, and it’s on an issue that may very well have killed several people. My reputation has already been debased in the Victorian Parliament, by Health Minister David Davis. I’m expecting more political dirt to come my way.

First, the back story. The issue is the Hazelwood coalmine fire, which burned from February 9 to March 10 this year in Victoria’s Latrobe Valley. It covered the surrounding area in thick smoke and ash, and caused eye-wateringly high levels of particulate pollution in the nearby town of Morwell.

The scientific literature on exposure to coal smoke is crystal clear. London’s famous 1952 smog caused an estimated 12,000 deaths, whereas Dublin’s 1990 ban on coal has saved350 lives a year.

So it’s understandable that a group of local residents has raised concerns about their health after being exposed to the Hazelwood pollution. They enterprisingly collated death notices from local papers and, based on some troubling numbers, they then sought out the official numbers of monthly deaths.

With help from an ABC journalist they passed this data on to me and I ran a statistical analysis that compared average death rates during February and March 2014 with monthly average data going back to 2009.

My results revealed an 89% probability that death rates were above average during this period, with an estimated 11 to 14 extra deaths.

The Victorian health minister’s response to these figures has been disappointing. Rather than consider the evidence, Davis tried instead to blacken my reputation and has claimed publicly that my analysis is biased. He (or his staff) has trawled the archives of The Conversation and my CV for ammunition.

First he appeared on ABC radio and stated that it was “important for the community to know” that I have “done work for a political party”, referring to my “expert review work for the Queensland Greens”.

Back in 2008 I read the Queensland Greens’ policy on air pollution and provided some comments. It took me about 30 minutes and I did it for free. I was happy to do it and would do it again. Hopefully I was able to update the policy with the latest scientific evidence.

Next, Davis used parliament to accuse me of presenting the results “in a certain way for political purposes”. He also called me an “ideologue”, a “well-known activist”, and (most bizarrely) a “climate change person”.

To claim that I would skew an analysis to misrepresent the data is a very serious allegation and one that I wholly reject. I’ve made my analysis publicly available – if you can see where I’ve added a political bias then let me know.

While irritating on a personal level, this episode is yet another example of a political attack on science. Clearly, the message that the Hazelwood fire may well have killed people won’t be a popular one with the state government. Disappointingly, it seems the government has responded by trying to discredit the messenger.

We have seen similar attacks by politicians before, most notably against climate science, when scientists are harangued for making perfectly legitimate statistical adjustmentsor the Bureau of Meteorology is wrongly accused of fiddling data.

Mr Davis’s logic is that because I once gave advice to a political party, all of my subsequent scientific research can be discredited. The message he is sending to scientists is: don’t ever work with political parties.

This is exactly the opposite of what’s currently needed. If more scientists talked to politicians, we would probably have more evidence-based policy on wind farms in Victoria, a national food labelling system, and supervised drug-injection facilities.

Sadly, these are just a few of the many areas where current government policy is completely at odds with the science.

Australia’s air is relatively clean. A global analysis ranked particulate air pollution as the 26th biggest health problem in Australasia, whereas it was the 4th biggest in East Asia.

Nevertheless, given that 1,400 Australians are killed every year by traffic pollution and that there is no real safe level for air pollution, we could still deliver massive health benefits by making our air cleaner.

How would our politics rank on a global table of cleanliness? Wherever we sit, we can always do better. One thing our air and our politics have in common is that the cleaner they get, the better off we are.