These Marine and Coastal Parks are recognised internationally as waterbird habitat.  They are also popular for boating and fishing.

Corner Inlet is the most easterly, and consequently the warmest, of Victoria’s large bays. It has a complex network of mangroves, saltmarsh, mud banks, seagrass beds, rocky islands and deeper channels. Corner Inlet supports huge numbers of migratory water birds and healthy populations of seafloor animals and plants that are rare or absent elsewhere in Victoria.

Corner Inlet Marine National Park provides protection of one of the major bays and inlets on Victoria’s coast. Within the bays sheltered waters are found communities of four of Victoria’s species of seagrasses which form extensive beds here. These include Victoria’s most extensive beds of Strapweed or the Broad-Leaf Seagrass Poisidonia australis, the dominant seagrass growing on submerged banks; Swan Grass Zostera muelleri growing in the intertidal areas; EelgrassHeterozostera tasmanica growing on the top and base of submerged banks; and Southern Paddleweed Halophila australiswhich grows around the edge of Poisidonia beds and across sandy patches.

Beneath the seagrasses there are often many animals and plants. Around the base of seagrasses are occasional clumps of sea squirts, sponges, and various green algae including the fleshy branching Codium fragile or Dead Man’s Fingers, and the beautiful feather-like Caulerpa trifaria. Common crabs beneath the seagrasses include the Red Swimmer CrabNectocarcinus integrifrons and the long limbed Decorator Crab Naxia aurita. Many of the seagrasses have large seasnail populations feeding on the encrusting and attached algae. These include snails such as turban shells and the beautiful Pheasant Snail or Painted Lady Phasianella australis which gather algae with its long flexible body. 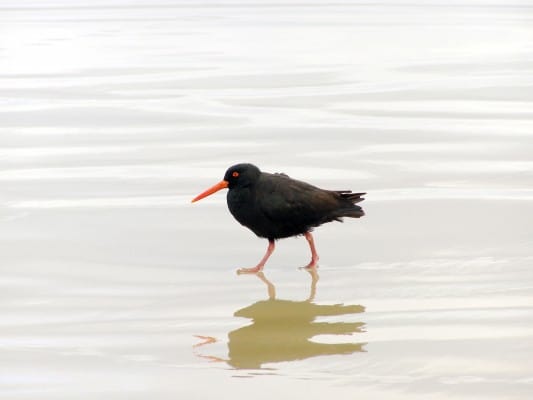 Corner Inlet is recognised internationally as an important waterbird habitat

Feeding on the debris that accumulates within the Marine National Park are a range of seastars including the multi-coloured Common Seastar Patiriella calcar and the Velvet Seastar Patiriella brevispina, burrowing Heart Urchins Echinocardium cordatum, as well as many bivalve molluscs that take in the detritus from the water. Feeding on the scavengers are in turn a range of predators including the 11-armed Seastar Coscinasterias muricata, the black and white seastar Luida australiae, Blue Ringed Octopus Hapalochlaena maculosa and a wide range of fish.

Smaller fish and squid hide within the seagrass leaves or emerge to feed on open sandy areas. These include Weed and Rock Whiting, Cobblers, Southern Gobbleguts, Gobies, Toadfish, Globefish, Bridled and Pygmy Leatherjackets, and various Pipefish. Larger animals include Stingarees, Southern Fiddler Rays or Banjo Sharks, Rock and Sand Flathead, Greenback Flounder and schools of juvenile Silver Trevally. Southern Pygmy Squid (Idiosepius notoides), are regular inhabitant of the seagrass beds and the iridescent Southern Dumpling Squid (Euprymna tasmanica) which feeds at night above the seagrass leaves is also common. Larger commercially important species such as King George Whiting adults, Salmon, Garfish and Gummy and School Sharks are not often seen in these areas.

In deeper channels communities include vast numbers of suspension-feeding Brittle Stars (Amphiura elandiformis andOphiocentrus pilosa) which raise their arms from the sediment in order to capture passing plankton and detritus. ‘Mini-reef’ systems can also be found around dead shells include communities of sea squirts and attached bryozoans, anemones, sponges, hydroids and some red seaweeds.

A spectacular but rarely seen inhabitant of the park is the shy, tiny, Southern Dumpling Squid. Rotund, big eyed, and iridescent, they are night feeders, burying themselves in the sand during the day. These squid have evolved an unusual symbiotic relationship with light-producing bacteria. As juveniles, Southern Dumpling Squid catch the bacteria and nurture them inside special body cavities. As the squid grows, the bacteria produce light in return for the squid providing food (sugar). 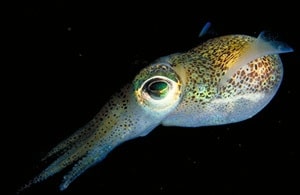 It is a mutually beneficial relationship because at night the squid is able to control the amount of bacterial light that it emits from its underbelly to match the starlight or moonlight that shimmers through the water above. This form of camouflage is called counter illumination and enables the squid to avoid predators like flathead when moving over the seagrass.

King George Whiting adults are believed to spawn west of Victoria’s bays and inlets, somewhere near the south Australian border, and the larvae resulting drift for 90-150 days before entering Victorian bays and inlets. The larvae settle into shallow seagrass areas and quickly begin to develop into juvenile fish that remain within the seagrasses for four to five months before shifting out of the seagrasses and feeding on the sand flats. During this time whiting are observed to feed over sand at night then return to the shelter of the seagrass during the day. Juvenile fish feed on a variety of small crustaceans including microscopic copepods, polychaete worms and larger crustaceans sourced from the open sand. Adult animals move out from the seagrasses and feed largely in the deeper channels and over algal communities outside of the Marine National Park.

The recreational and commercial fisheries for this species of fish depend largely on the health of seagrasses as well as adequate management of the fishery itself. Unfortunately, mainly due to changes in the catchment, large areas of the seagrasses within Corner Inlet Marine National Park have been lost.

Corner Inlet is a large submerged plain that is bordered to the west and north by geological faults and is sinking slowly as South Gippsland itself rises. The Inlet however receives a large amount of sediment that washes in from surrounding hills. Large mudflats and sandbanks cover much of the Marine National Park. Some of these banks are exposed at low tide while others remain submerged.

On the ebbing tide a system of deep channels carries the water from the banks to the entrance on the eastern side. These channels range in depth from about 1m to 20m. The main entrance channel is approximately 40m deep. Due to the shallow water and large number of banks tidal flow is slow and many areas have tidal peaks occurring up to an hour and a half after peak tides at the entrance.

Broad-Leaf Seagrass is a ‘keystone species’ in Corner Inlet Marine National Park and provides crucial habitat as a nursery for many important recreational and commercial species of fish, in stabilising the sediment, and in providing shelter and food for many other creatures. Fish and large crabs find refuge beneath the fronds while the leaves themselves become a substrate for a community of small algae and encrusting invertebrates such as bryozoans and colonial ascidians. The leaves of the Poisidonia are an important food source for many animals that feed on the detritus that is formed when dead seagrass leaves are attack by decomposing organisms such as bacteria.

Poisidonia has an interesting way of coping with loss of photosynthetic surface when encrusted in algae or invertebrates. The grasses will produce from the base some new leaf while the older encrusted tips of the leaf are allowed to die and break off the plant. There is a constant cycle during spring and summer of growth at the base then death at the tip ensuring that some fresh green leaf is available for the plant to utilise the light. Poisidonia leaves can reach up to a metre in length despite this process of growth and death and form luxurious underwater meadows. During winter large storms often reduce the seagrass meadows to less than 300mm leaving vast piles of seagrass debris along the shorelines. Even these leaves are important as they are soon attacked by crustaceans such as amphipods or sand hoppers and recycled into valuable food materials.

Protected from the pounding surf of Bass Strait by barrier islands, the quiet waters of Nooramunga Marine and Coastal Park create an intricate network of waterways and islands of outstanding environmental significance and scenic beauty, framed by the majesty of Wilsons Promontory. The park consists of shallow marine waters, isolated granite islands, intertidal mudflats and a complex of over 40 sand barrier islands.

Thirty-two species of migratory waders have been recorded, including the largest concentrations of Bar-tailed Godwit and Great Knot in south eastern Australia. At low tide these birds can be seen spread out in groups feeding over the mudflats. Each species has a different bill designed to catch certain types of food which minimises competition between them. At high tide, huge flocks of waders congregate on the sand spits at the ends of the barrier islands.

In summer the ocean beaches and sand spits in Nooramunga Marine and Coastal Parks are also used as nesting sites by shore birds like the Pied oystercatcher, Crested Tern, Caspian Tern, Fairy Tern and the endangered Hooded Plover and Little Tern. Other notable bird species include the White-bellied Sea Eagle, the endangered Orange-bellied Parrot and the rare Ground Parrot, which lives in coastal heaths.

The woodlands are a home for a variety of animals such as Eastern Grey Kangaroos, Swamp Wallabies, koalas and many species of birds. Other notable species found within the park include the New Holland Mouse and Swamp Antechinus. Hog Deer which are an introduced species, are found on some islands and mainland areas, particularly Gellions Run and Snake Island.

The park contains a diverse range of habitats, including some of the largest stands of White Mangrove and saltmarsh areas in Victoria. The saltmarshes are dominated by Beaded and Shrubby Glassworts, while the upper margins are frequently covered in pigface, which produce a spectacular show of pink flowers in spring.

Seaward of the mangroves are extensive areas of intertidal mud and sand flats. An immense range of marine plants and invertebrates can be found here which in turn provide food for the thousands of migratory wading birds that arrive each summer from their northern hemisphere breeding grounds. The two parks are recognised as wetlands of international significance under the Ramsar convention.

Fringing the saltmarshes and mangroves on the mainland and the islands are stands of Swamp Paperbark and Coastal Tea-tree which give way to a rich hinterland of Coast Banksia and Coastal Manna Gum woodlands. Wildflowers, including orchids, are abundant in these heathy woodlands.