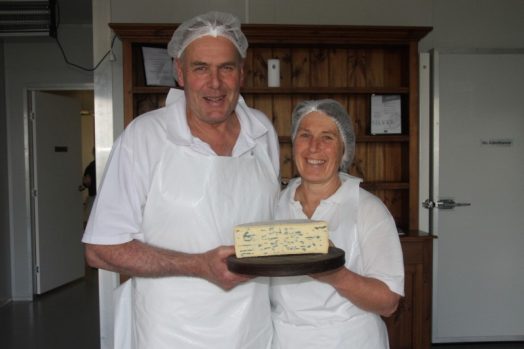 • Barry Charlton and Cheryl Hulls are thrilled to have had four of their products achieve great success at the recent 2016 World Cheese Awards held recently in San Sebastian, Spain.

BERRYS Creek Cheese has once again shown it has what it takes, taking out a Gold Medal, two Silver and one Bronze Medal on the international stage at the 2016 World Cheese Awards held recently in San Sebastian, the European Capital of Culture 2016, in the Basque region of Spain.

Both the Sunrise Gold which took home the Gold Medal and the Riverine Blue which was awarded a Silver Medal are created from top quality buffalo milk, sourced from Bryan Jans’ ‘Sunrise Plains’ farm in Giffard West.

The degree of difficulty in working with buffalo milk is certainly paying off for Barry Charlton and Cheryl Hulls.

“Buffalo milk is very different from cows’ milk,” said It’s a hard milk to work with but it produces a very high yield and has a lovely flavour,” Barry said.

The Riverine Blue has had a string of successes since its inception around 2½ years ago. It was awarded a Bronze in the 2014 Guild of Fine Food, a Gold in the Royal Sydney Cheese and Dairy Show 2015, Gold and Champion Non Bovine Cheese as well as Grand Champion of Show at the Royal Queensland Food and Wine Show 2015.

Not only was it named the Highest Scoring Non Bovine Cheese and Champion Cheese at the DIAA Victorian Division 2015 – it also took home the title of Most Outstanding Show Exhibit. The Riverine Blue then outdid itself by taking out those very same awards in the DIAA Australian Division 2015.

These titles were followed up by Gold and Champion Goat Sheep Buffalo Cheese in the Melbourne Fine Food Awards 2015, and in this year’s Royal Sydney Cheese and Dairy Produce Show it took home Gold in addition to the Champion Sheep Goat Buffalo Trophy and the Australian Cheeseboard Perpetual Trophy.

The Oak Blue which is made from cows’ milk was awarded a Silver Medal at San Sebastian and the Mossvale Blue – also produced from cows’ milk, took home a Bronze Medal.

The Oak Blue also been named as a finalist in the 2017 Australian Grand Dairy Awards – one of the industry’s most prestigious awards.

A total of 470 gold medal award winning entries were judged by 12 trained judges. The top three cheeses in each class was awarded a finalist placing. The winners will be announced in Februrary.

“Looking at the entries from the rest of the world, to be a finalist in an event such as this on the world stage such an honour. It shows that we must be doing something right,” Barry said, adding that for one of their products to be up within the top three blue cheeses in Australia is a thrill.