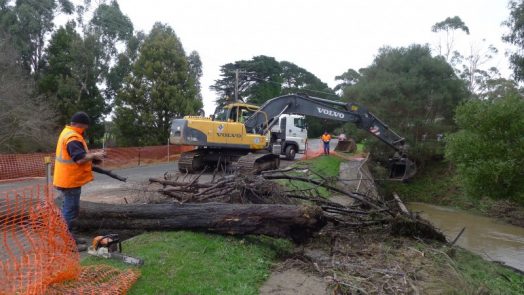 THE band of heavy rain forecast for South Gippsland by the Bureau of Meteorology on July 5 descended upon the Corner Inlet district with a vengeance!

Foster received 79mm of rain in the 24 hours between 8am Tuesday to 8am Wednesday, causing Stockyard Creek to break its banks, as did Shady Creek at Toora, where 82mm of rain was recorded for the same period.

The deluge had a devastating effect on a number of properties in Foster and on infrastructure along Stockyard Creek. A considerable quantity of debris, including tree trunks and branches, which has been in and alongside Stockyard Creek for close to one year, was carried along in the creek, blocking the outlets at the Boundary Road bridge. The force of the water and impact from debris demolished the retaining wall above the outlets, damaged the fencing along the creek and footpath.

SES volunteers, police and Shire officers, door-knocked along Pioneer Street, Boyd and Apex Courts and part of Station Road to alert residents of the rising floodwaters.

Geoff and Shirley McCraw of Boyd Court, Foster, were woken at around 10.30pm by police officer. An inspection of the property revealed there to be around 12 inches of water over the back yard and inundation by water inside the house to a depth of approximately 10cm in every room.

Geoff and some willing helpers tried to sweep the water out, but found that it was coming in as quickly as it was going out.

He was urged at 1.45am by SES volunteers to evacuate to the Wilsons Promontory Motel – but not one to abandon ship, Geoff went back to bed.

Geoff and Shirley are very grateful to friends who rallied around to help with the clean-up and with accommodation on Wednesday night.

“It’s great to have good mates… together we emptied the furniture out of the house,” he said, adding that all carpets, underlay, rugs, skirting boards and a great deal of furniture have been seriously water damaged.

Two residents of Boundary Road, Foster were relocated to South Gippsland Hospital to ensure their safety.

Another casualty of the flood was Pearl Park’s footbridge, where the force of the impact dislodged the bridge from footings at its eastern end.

Ken Robb of South Gippsland Shire Council’s Assets Maintenance team, visited Pearl Park on Wednesday afternoon in an effort to assess the damage, but was not able to ascertain the structural integrity of the bridge.

In acknowledging the importance of public safety, Council has booked a Level Two inspection of the bridge by an independent company which will rate every component of the bridge to aid in prioritising repairs or replacement.

Local SES volunteers attended 13 callouts on Tuesday afternoon and evening, followed by one more on Wednesday. The Foster SES unit worked alongside police, Council, VicRoads, and the Yarram and Leongatha SES units to help ensure the safety of South Gippsland residents.

Throughout Tuesday night, Foster SES unit provided assistance with sandbagging and diversion of surface runoff to properties that were flooded or were under threat of flooding.

Council received a high volume of calls regarding roads damaged by water in the Corner Inlet area, as well as six callouts after hours for assistance within the district.

A door-knock was organised in Welshpool to alert residents to the possibility of flooding, and due to a power outage in the town, CFA members set up a relief centre at the Welshpool Memorial Hall.

Martin Fuller, CEO of West Gippsland Catchment Management Authority (WGCMA) told The Mirror that although it is not standard practice to totally clear rivers of debris to enable the free flow of water, significant restoration works were carried out along sections of Stockyard Creek some time ago.

A South Gippsland Shire Council spokesperson told The Mirror that debris in and around Stockyard Creek is the responsibility of WGCMA and that once debris has collided with Council assets – such as a bridge, the onus is then on Council to act.

Mr Fuller said that an assessment of Stockyard Creek by WGCMA will provide data to help determine what may need to be done by WGCMA and South Gippsland Shire in the way of rehabilitation and ongoing management.

For the residents affected by the recent flooding of Stockyard Creek, action can’t come soon enough.

It is important to remember that floodwaters may remain for some days after such an event. The SES advises that all community members should:

Anyone requiring assistance for flood or storm damage should call 132 500 or 000 if there is a life threatening emergency.