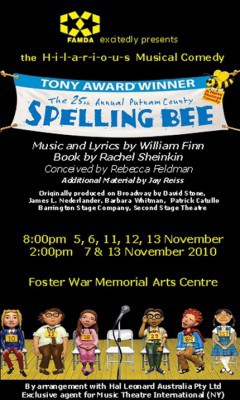 The 25th Annual Putnam County Spelling Bee, which is is buzzing into Foster!

Join six quirky adolescents as they vie for the spelling championship of a lifetime.

Nominated for an incredible six 2005 Tony awards and winner of two, Spelling Bee will charm and delight with its frivolous spelling bee fun.

The show centres around a fictional spelling bee set in a school hall somewhere in the middle of USA.

The story concerns the pre-pubescent spelling contestants, all played by young adults, and the three troubled grown-up supervisors of the bee.

The three adults adjudicating the proceedings are a nostalgic former spelling bee winner, a mildly insane Vice Principal and the Official Comfort Counsellor completing his community service to the State of New York.

As the six kids face off in the battle of their lives, the competition is intense and the words outrageous.  Gradually the kids learn that winning isn’t everything and that losing doesn’t necessarily make you a loser.

Let the spelling (and the singing) begin!

FAMDA’s hilarious version of this bright new musical comedy that will warm your heart and bring side splitting entertainment to South Gippsland.

Directing FAMDA’s production is Nathan Eva who made his stage debut as Oliver in FAMDA’s 2000 production of Oliver!.

John Laurie, director of Into the Woods for FAMDA in 2009, is the Musical Director

Jubilant and touching, this Tony Award–winning musical comedy pits quirky prepubescent overachievers against one other in the spelling challenge of a lifetime.

Amid infectious songs such as “My Friend, the Dictionary,” “Woe Is Me, and “I Speak Six Languages,” the nerdy and wordy learn that winning isn’t everything.